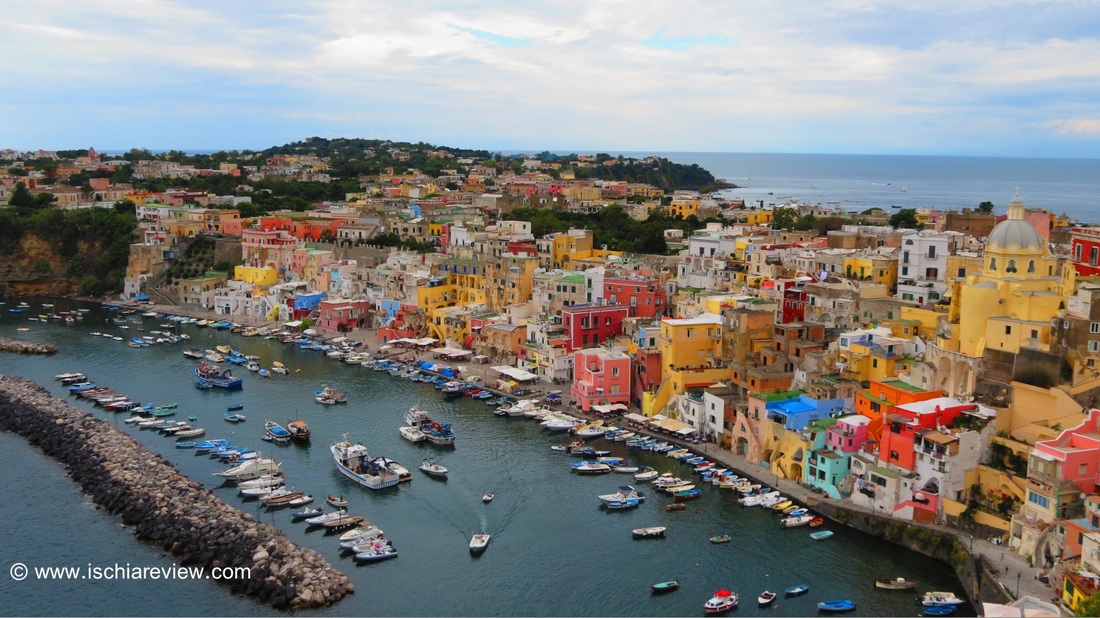 The Island of Procida

Much like yesterday we've got another cloudy start to the day in Ischia, the much hoped-for sunshine never arrived and these conditions look set to stay until tomorrow. Having said all that it still doesn't feel much like winter with temperatures very mild for this time of year. Today's maximum should be around 15° Celcius (60° fahrenheit) with a minimum of 12°C (53°F) this evening. It's all very calm out at sea with only a very light breeze ruffling the smooth surface. Visibility is quite low at the moment but should improve over the course of the day.

Today's photo is of our neighbouring island, the lovely Procida. The harbour area is famous for its brightly coloured houses that have been welcoming visitors and fishermen for hundreds of years. In fact it's said that the houses were painted in this way so that sailors would easily be able to spot their homes when they returned from long journeys out at sea with their wives waving them in as their ships approached the island.

Despite being a very short distance from Ischia, Procida is quite different in many ways. The first difference is the comparative size of the two islands, Procida being the smaller of the two with a surface area of around 4 square kilometres compared to Ischia's 46. The island has a much more sleepy feel to it than it's bigger sister with a slighty reduced emphasis on tourism compared to its neighbour.

Perhaps Procida's biggest claim to fame is that it was the setting for the multi-award-winning film "Il Postino", the story of the naive postman who befriends the world-famous poet Pablo Neruda during his stay on the island and discovers a previously hidden talent for writing prose. There are many references to the film across the island with shooting locations marked by plaques while the bar that was used for various scenes is still there and actually named "La Locanda del Postino" in reference to the film's title.

The closest point to Procida on Ischia is Castello Aragonese in Ischia Ponte. Looking at the castle you will feel you could almost swim to the island that sits just behind the castle. That island is in fact called Vivara which is an uninhabited nature reserve that is opened to the public on just a few occasions throughout the year.

Procida is very easily accessible from Ischia with many of the ferry and hydrofoil services between Naples and Ischia stopping along the way in Procida with the journey between the two islands lasting around 15 minutes. For details of prices and timetables click here where you will find our guide and the chance to purchase tickets if required.

Ok that's all from me this morning, keep all your e-mails coming in with questions about the island and any feedback you have about the blog or the website in general, it's always great to hear from you all.

Have a great Friday!