FAMOUS  PEOPLE  WHO  HAVE  VISITED  ISCHIA 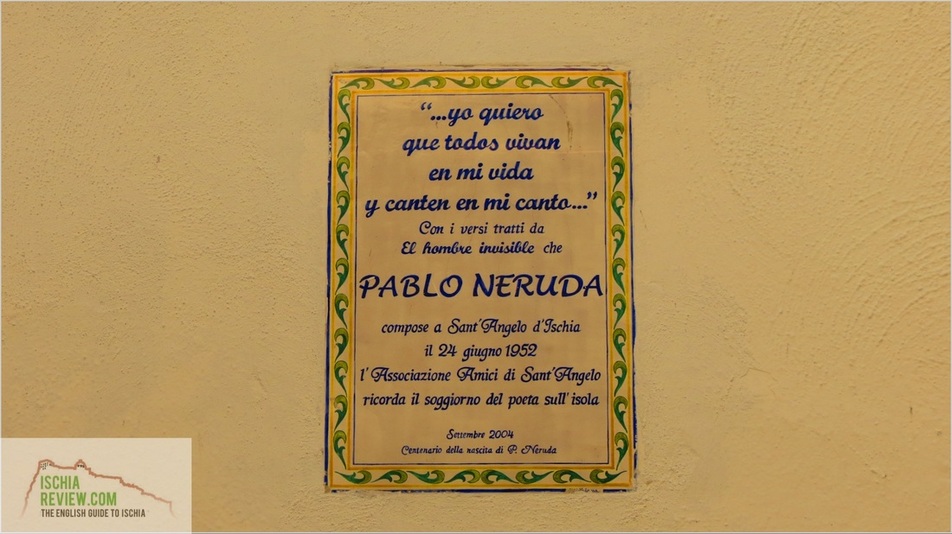 Commemorative plaque to Pablo Neruda in Sant'Angelo from 1952.

FAMOUS  PEOPLE  WHO  HAVE  VISITED  ISCHIA

List of celebrities including writers, artists, actors, singers and important historical figures who have been to Ischia at one time or another.
Over the years, Ischia has been a magnet not just for everyday travellers and tourists in search if sun, sea and relaxation but for a whole host of interesting and important figures from history. The island's unique characteristics have proved an irresistible draw to some of the leading lights from the world of creative arts such as literature, poetry, film, art & music, inspired by Ischia's natural beauty which allowed them to enthusiastically scribble their ideas whilst breathing the natural sea air and enjoying the warm temperatures of southern Italy.

Ischia has also attracted some of the most significant characters from world history including scientists and politicians who visited the island in different eras and for varying purposes. Our list puts these characters together for the first time and provides a fascinating insight into Ischia's history, both recent and distant.

The well-documented story of Ischia's involvement in the world of movies has alone provided a list which reads like a who's who of Hollywood greats and the island's two annual film festivals "The Ischia Global Film & Music Fest" and "The Ischia Film Festival" ensure that the conveyor belt of stars continues to be regularly refreshed.

Here's our list, we'll be updating it as and when important new figures arrive so keep an eye on this page as it evolves:

Stendhal (23rd January 1783 – 23rd March 1842). French writer who's official name was Marie-Henri Beyle. Whilst travelling around Italy, Stendhal stopped in Ischia in 1817 where he slept in a peasant’s farm, spent time donkey-riding and having long chats with a vineyard owner, surprised at how the people in Ischia immediately treated him as a friend, using familiar terms such as "tu" which is still an unusual way to address a stranger in Italy, even in modern times.

W.H. Auden (21st February 1907 – 29th September 1973). The Anglo-American poet spent several summers in Forio from 1948 to 1957, enjoying the “bohemian” atmosphere at Bar Maria while discussing poetry and art with his literary friends. To the island, Auden dedicated the poem “Ischia”: …”  I am presently moved by sun-drenched Parthenopea, my thanks are for you, Ischia, to whom a fair wind has brought me rejoicing with dear friends from soiled productive cities. How well you correct our injured eyes, how gently you train us to see things and men in perspective underneath your uniform light…” (from “Ischia”, 1948).

Truman Capote (30th September, 1924 – 25th August, 1984), American author and screenwriter, was in Forio for several months in 1949. In a letter to his editor Robert Linscott, he wrote: “Dear Bob, what a strange and strangely enchanted place this is: an encantada in the Meditteranean [sic.]. It is an island off the coast from Naples, very primitive, populated mostly by winegrowers, goatherders, W.H. Auden and the Mussolini family. I have a vast room overlooking the sea: it is wonderful to work here and I am doing quite a lot”.

Tennessee Williams (26th March, 1911 – 25th February, 1983). The American playwright and author was in ischia for 2 weeks in 1949 with his lover Frank Merlo, hanging out with Truman Capote and W.H. Auden.

Pablo Neruda (12th July 1904 – 23rd September 1973). At the beginning of the ‘50’s, Chilean poet Pablo Neruda and his wife Matilde  spent several months in Sant’Angelo, enjoying the simple life of the locals and becoming fascinated observers of  the lives of the laborious  fishermen. In Sant’ Angelo Neruda learnt how to swim, as his wife later recalled.


The World of Film

Angelo Rizzoli (31st October 1889 – 24th September 1970). The Milanese businessman, entrepreneur, movie producer, editor and in many ways the benefactor of the island of Ischia. In the 1950's Angelo Rizzoli turned Ischia into an international jet- set holiday destination, building luxury hotels and resorts. Many of his VIP friends such as Maria Callas, Sophia Loren, Ava Gardner and many more were guests in his villas including Villa Arbusto in Lacco Ameno which is now a museum paying tribute to his life in Ischia.

Elizabeth Taylor (27th February, 1932 – 23rd March, 2011). British-American actress. In the summer of 1962 she was in Ischia to shoot the Hollywood masterpiece “Cleopatra”. This is where the secret, “scandalous” love affair with Richard Burton broke with the world's media.

Tom Cruise and Nicole Kidman. In 1996 the couple was spotted having dinner in a restaurant at La Riva Destra

Jennifer Lopez. In the summer of 2009 J.Lo was spotted in Ischia on holiday with her (now ex)husband Marc Anthony and their twins.

Giuseppe Garibaldi (4th July 1807 – 2nd June 1882). Italian general that fought in many battles which led to the unification of the Kingdom of Italy in 1861. Garibaldi was in Casamicciola in 1864 to cure a war wound on his foot with the island’s thermal water and mud.

Marie Curie (7th November 1867 – 4th July 1934). The physicist and discoverer of radioactivity, was in Lacco Ameno in 1918 with a committee of scientists to test the thermal waters in Ischia.

Sir William Walton  (29th March 1902 – 8th March 1983). British composer. One of the most prestigious residents on the island of Ischia, Sir Walton and his wife Susana built the beautiful house-garden “La Mortella” in Forio just after marrying at the ‘beginning of the 1950’s and spent their lives together making the place rich with flowers and plants from all over the world, creating one of the most beautiful visitor attractions on the island.

Prince Charles was in Ischia in 2002 to visit Lady Walton, the widow of the English composer William Walton, and the beautiful garden “La Mortella” in Forio.

Angela Merkel. The German chancellor is an “habitué” of the island of Ischia, often choosing the town of Sant’ Angelo for her Easter holidays.

Celebrities who have visited Ischia either as guests or to be awarded at the annual summer film festivals Ischia Global Film & Music Fest or The Ischia Film Festival:


Written and researched by: