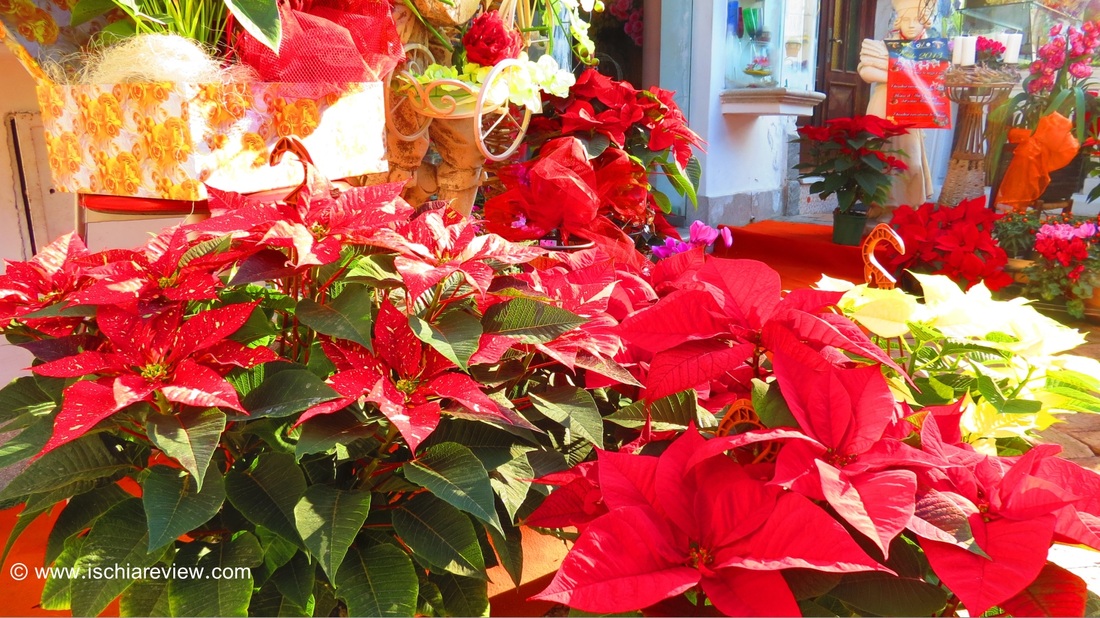 We've got another slightly cloudy sky in Forio this morning, not that really thick cloud, more the type that lets the sun poke through in little pockets here and there, "scattered cloud" you might say. There's also a little bit of wind around that we didn't have yesterday and while you certainly wouldn't say the sea is rough, it does look a little bit choppy out there, certainly not choppy enough to worry any ferries or hydrofoils though. Temperatures today should be a minimum of 13° Celcius (55° fahrenheit) and a maximum of 14°C (58°F), more or less.

Today's photo is of some of the beautiful Poinsettia flowers that you see all over the island at this time of year, much as you do in many other English-speaking countries. In Italy the flowers are called "Stella di Natale" (Star of Christmas), and are used to decorate houses with their bright red flowers and dark green leaves fitting in nicely with the traditional Christmas colour schemes.

Despite being a pretty flower in its own right, the Stella di Natale also has symbolic religious importance and was first used as part of Christmas celebrations in the 17th century by Franciscan friars in Mexico. The story goes that a child who was so poor that she couldn't afford any gifts to celebrate Christmas, was visited by an angel who instructed her to collect some old branches and place them in front of the altar of the town's church. The next morning, the old branches had turned in to dazzling scarlet Poinsettia's. The friars were inspired by the story and started to use the flowers as part of their own Christmas displays.

The star-shaped leaves coupled with the deep red colour are also said to symbolize the blood of Christ and the Star of Bethlehem and from these stories and legends the popularity of the flower grew all over the world and their cultivation is now a huge global industry. As you walk around Ischia at the moment you can't fail to see hundreds of Poinsettia in doorways, windows and shop displays along with all of the traditional Father Christmas (Babbo Natale) figures, tinsel and baubles. They are widely available in most florists as well as some grocery stores and supermarkets, vying for space with the omnipresent Panettones and Pandoros that I spoke about yesterday.

Passing through Forio town centre last night it was great to see the children's concert of hymns and carols in the main shopping area, and with so many people out and about it all felt very festive. I still haven't done any Christmas shopping yet so I think I should go and put that right and see what I can find in Forio's Christmas market.