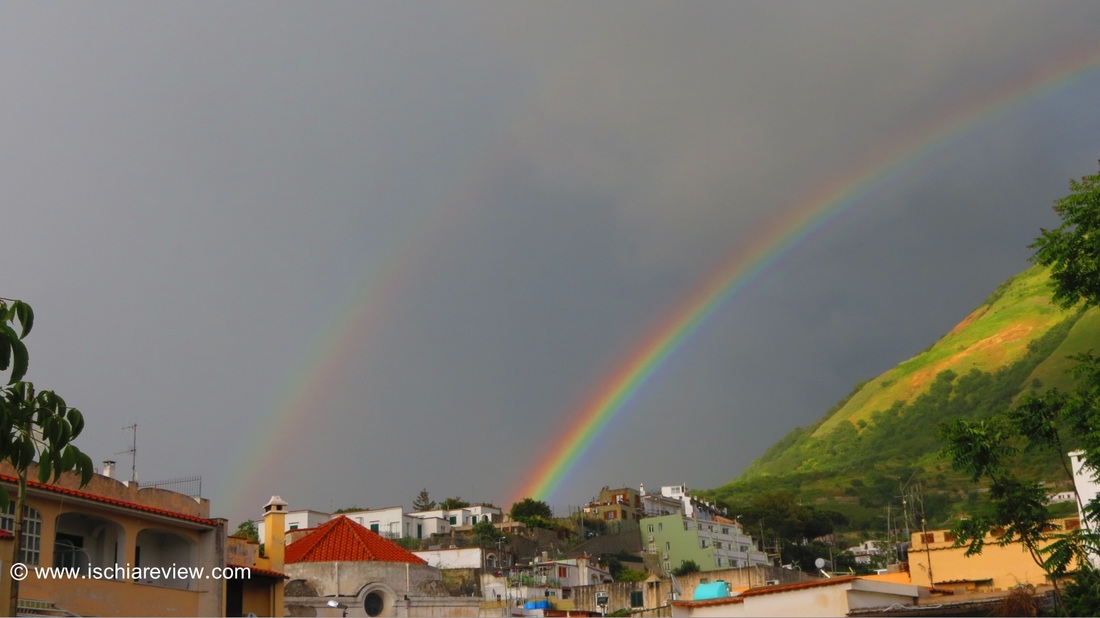 Ok ok, I can hear the slow hand claps as you've patiently been waiting all day for today's blog and which has finally materialised way past its intended time of early morning. It's been such a busy day at Ischia Review towers that even the most highly prioritised of my daily activities (the blog) has had to give way to countless other tasks, the details of which I won't bore you with. With all of these pesky bits and bobs now done and dusted for the day I can finally sit down, relax and tell you a little bit about what's been going on in Ischia.

Well I'll start with the weather as that's been the most notable aspect of island life today. We've had almost 4 seasons in one day, it's been sunny at times (summer), we've had a good drop of rain for the plants and flowers (spring, arguably a tenuous link), leaves falling from some strong winds (autumn, even more tenuous!), and well, it's winter anyway so I don't have to explain that one. We've had a maximum temperature of 15° Celcius (58° fahrenheit) which is pretty high considering we're nearly in the last week of January, but there'll be a significant drop as we get towards the early hours with a low of 9°C (48°F). Most notable among today's weather elements has been the fairly heavy winds which have fallen just a bit short of being a storm. However, they were strong enough to make a pretty decent attempt at tearing my head off my neck as I rode my scooter past Citara beach earlier, the chin-strap just about keeping my helmet in place as the wind crept inside it with a violent wrench. In fact now I think of it that could be a new sport, something along the lines of para-gliding, "scooter-gliding" perhaps?

Today's photo is a little homage to today's unique conditions which resulted in a first for me, I was riding through Forio town centre desperately trying to avoid getting soaked, a beautiful double rainbow appeared in front of Mount Epomeo so I hastily dismounted, got the camera out and took a few snaps for my beloved readers. I'm not sure if it's some kind of omen or sign from the gods but whatever its purpose it had a mystifying aura and presence about it. Who needs to go to Iceland to see the Northern Lights when you've got the spectacular double rainbow phenomenon of Forio!

The outlook for tomorrow is much brighter and after a spell of rain in the early morning we should have a pretty clear day with lots of sunshine. The next few days after that look to be similar with the odd shower expected as well here and there so make sure you pack an umbrella if you're planning a visit.

Ok that's all for today, I'll be back with more tomorrow in the much healthier morning slot and with no need for slow hand claps.

Today in history: The rubber heel patented by Humphrey O'Sullivan (1899)