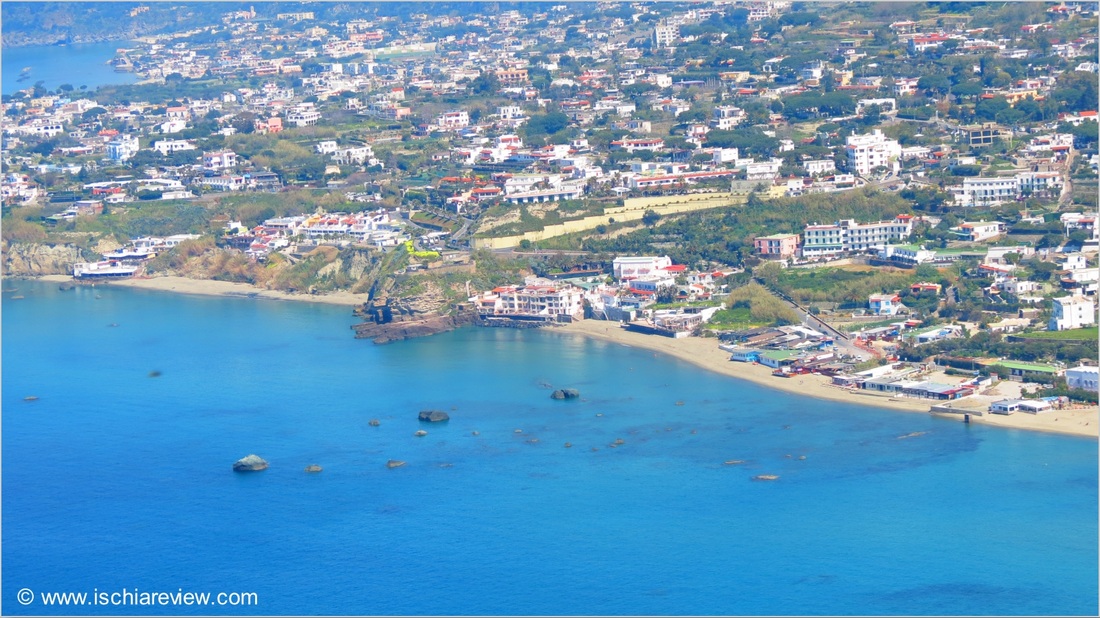 The Bay of Citara, Forio

We've got a beautiful day at the start of a very important week in Ischia. Having just returned to the island last night after a "reverse summer holiday" (the type of holiday where you go somewhere colder then you live!), opening the shutters this morning was a real pleasure, there's not a cloud to be seen, the birds are twittering contentedly in the trees and there are the hypnotic fragrances of jasmine and wisteria filling the spring air. Looking out to sea there's hardly a ripple and a huge, bright white cruise ship has seen fit to drop anchor and admire the scenery for its guests to enjoy.

I say it's an important week because with Easter just a week away, this is the time when the island really wakes up from its winter slumber in a big way. Most of the hotels are either open or just about to be and the same applies to the thermal parks and gardens with Castiglione in Casamicciola for example opening on Thursday 17th and Poseidon in Forio already open.

This is also the time of year when the name Ischia reaches the world of international politics as the German Chancellor Angela Merkel and her husband take their annual holiday at the Miramare Sea Resort & Spa in Sant'Angelo. Mrs Merkel was snapped by the world media yesterday whilst paying a visit to the ruins of Pompeii and will be followed by her large entourage of security team, advisors and paparazzi throughout her stay.

Yesterday was Palm Sunday and passing through Naples on the way back to Ischia you could see lots of people walking around with olive branches that they would then take to church to receive a blessing. This really brought home the fact that Easter is almost upon us and nowhere is the sense of re-birth more acutely felt than here with the combination of spring filling gardens with a variety of fragrant and pretty flowers, the improvement in the weather, the re-opening of hotels & thermal parks and of course the religious ceremonies and celebrations that traditionally take place here.

On the evening of Good Friday the town of Forio will be transformed into a huge open air theatre as the "Actus Tragicus" takes place around its streets. The play tells the story of Jesus Christ's final hours as he is betrayed by Judas Iscariot before being condemned to crucifiction by Roman Emperor Pontus Pilot. The scene moves from Forio harbour where the actor playing Jesus is flogged before given his crown of thorns and made to carry his cross through the streets whilst being physically and mentally abused by actors dressed as Roman Centurions. The crucifix is then erected outside Chiesa del Soccorso where the final, dramatic scenes take place. If you do happen to be in Ischia this week than this is really something you should not miss as the whole show is carried out in an extremely moving and professional way, a real credit to the organisers and participants.

Shortly after Actus Tragicus comes La Corsa Dell'Angelo on Easter Sunday which is a very different affair as it marks a time of celebration at Jesus' rebirth and is joyously celebrated with large crowds on the streets all dressed up for the occasion,  giving each other hugs & kisses and offering greetings such as "auguri" (best wishes) and "Buona Pasqua" (Happy Easter). It's a really colorful occasion and again not to be missed if you're in Ischia at the time.

Looking ahead at the weather for the rest of this week it's slightly up and down, today will see a maximum temperature of 18° Celcius (65° fahrenheit), rising to a maximum of 20°C (68°F) tomorrow and Friday. We may get a little bit of wind and rain tomorrow night so just be sure to double-check your ferry or hydrofoil crossing before you leave to make sure they are running as scheduled. As a rule of thumb if the wind is below 20mph there shouldn't be any disruption but above that figure the hydrofoils start to be at risk of postponement or cancellation and anything above 25/30mph puts the ferries at risk too so just keep an eye on that if you're visiting in the next few days.

Today's photo is of the bay of Citara and was taken from Punta Imperatore which looks down on the bay and shows the two beaches, Citara on the right and Cava Dell'Isola on the left. Punta Imperatore is home to a lighthouse and a great place to take a walk around the winding streets of Panza. For anyone who's interested in how to get up there then just drop me a line and I'll give you full instructions.

Ok that's all from me for now, I'll be back with more later this week. Please keep all of your e-mails coming in as we like nothing more than helping visitors make the most of the island so just drop us a line if you've got something you'd like to know.