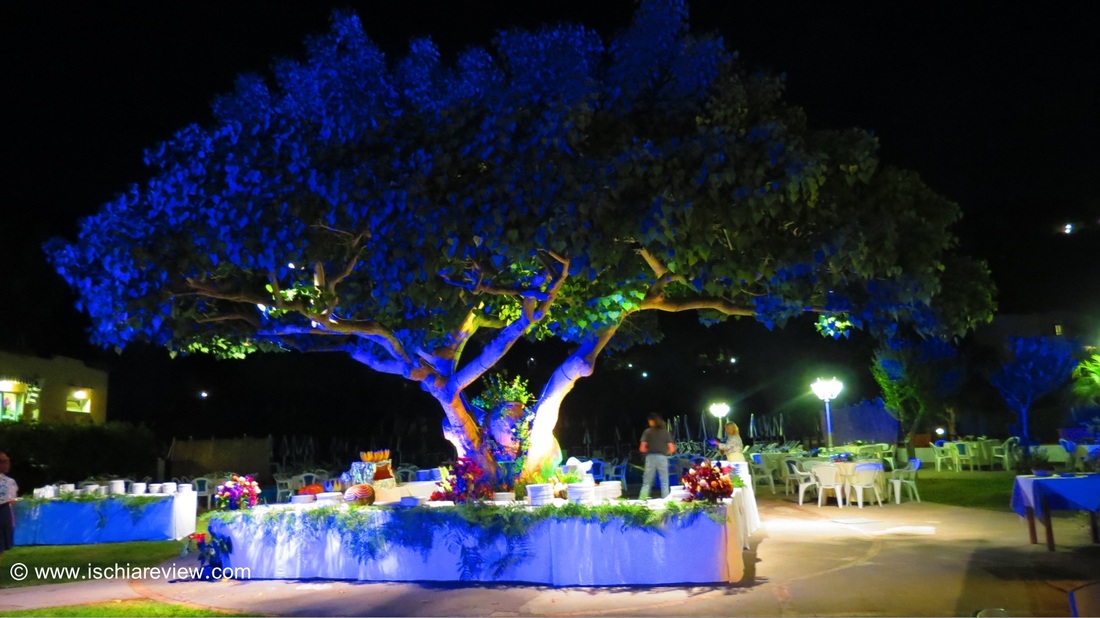 Well it's not the greatest start to the week in terms of the weather, it's been raining since last night, heavily at times and that rain has carried over to this morning. As we move deeper into winter the trees in the garden are almost bare, on one of them there are just two solitary leaves clinging on for dear life against the elements, huddling up to each other like an old couple sitting on a park bench. Despite the precipitation temperatures remain steady with an expected maximum of 15° Celcius (60° fahrenheit) and a minimum of 11°C (53°F).

Today's photo is from one of the lavish parties that were given at the Ischia Global Film & Music Fest last summer, this particular party being held at the beautiful Castiglione Thermal Park in Casamicciola. There are two film festivals in Ischia every June/July, the first of which is the Ischia Film Festival, followed very swiftly by Ischia Global the following week.

During the time of the two film festivals Ischia becomes the temporary home to a host of stars from the movie world and this year was no exception with Hollywood A-listers such as actors Samuel L Jackson, Nicolas Cage and Christoph Waltz joining the likes of directors Joel Schumacher and Baz Luhrmann. Other big names who were either honoured with prizes or attended the various ceremonies and parties this year included Vanessa Hudgens, Eli Roth and Nastassja Kinski.

The two annual festivals are just one part of Ischia's important legacy in the movies as the island has been used as the backdrop for around 30 feature films including Cleopatra and The Talented Mr Ripley which was actually a remake of the 1960 film Purple Noon starring Alain Delon which was also filmed in Ischia.

Apart from the festivals and the films that were made here, Ischia was also the home to two famous Italian film directors/producers, Luchino Visconti who's former home La Colombaia is now a beautiful museum, and Angelo Rizzoli who lived at Villa Arbusto in Lacco Ameno which is also now a museum.

Ischia's movie history is just one aspect that makes this island so special but as you'll see when you visit there's a lot more besides. For more information about which movies were made in Ischia click above or drop us a line and we'll explain where you can see some of the most famous spots that were used during the shooting of the most notable films.

Anyway that's all from me for today, I'll be back with more tomorrow morning.

Today in history: First photo of a comet taken from space (1973)