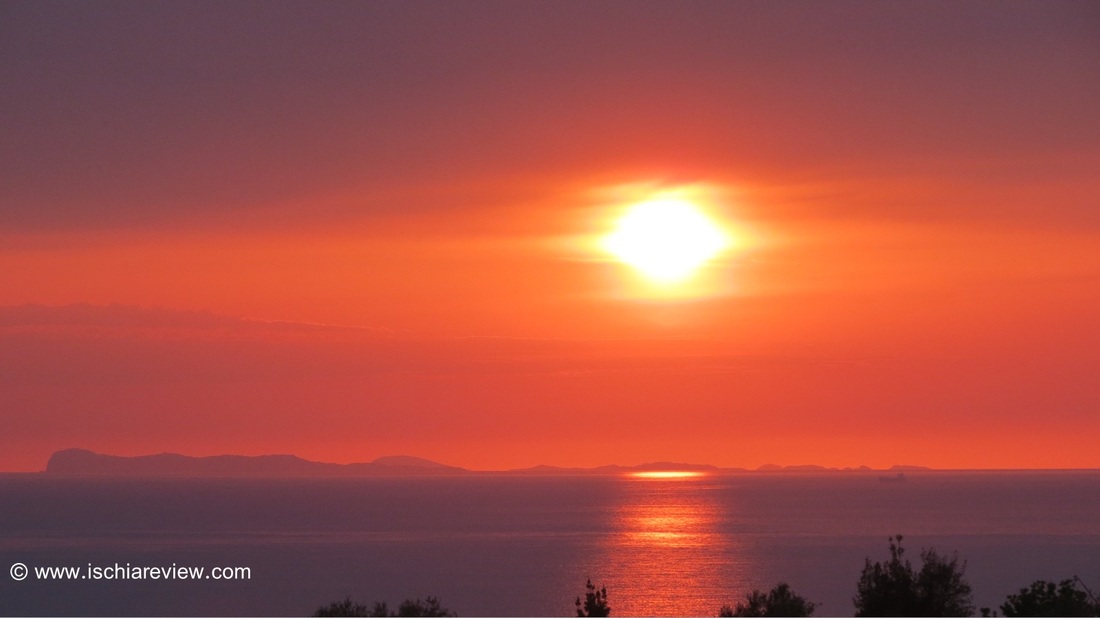 Another day on this fabulous island beckons even if the weather isn't exactly what you'd describe as fabulous juts yet! It's raining at the time of writing and I see some wildly conflicting weather forecasts, some are saying sun, some are saying rain and others are saying wind. I guess we can just surmise that there'll be a mixture of all three, probably. The predicted temperature should be around 20° celcius (68° fahrenheit) at the top end and cooling down to around 16°C (61°F), maybe!

Today's photo is of one of the beautiful sunsets that we get most evenings in Forio. Being on the western part of the island we are the last to see the sun in the morning, also as we're slightly in the shadow of the 800 metre Mount Epomeo. However, we get the benefit every evening, firstly because we get to see these gorgeous sunsets that seem to be a slightly different colour each time, but also because we get the sun for that bit longer each evening than happens on the opposite side of the island.

In this particular photo the sun is in fact setting over a different island, Ventotene which is around 20 miles away from Ischia and roughly two hours by boat. Ventotene is much smaller than Ischia both in terms of its population and its geographical size. A thin strip of land, 800 metres wide at its broadest point, stretches for 2 miles (3 kilometres) from east to west. These days the official population is around 700-800 permanent residents but years ago those numbers were swelled by the involuntary guests who were incarcerated on the prison island of Santo Stefano which lies a couple of kilometres to the east of Ventotene. The fascinating prison building was originally built by the Bourbons in 1797 and at its peak it was home to around 800 prisoners. The prison closed in 1965 and the island of Santo Stefano has been uninhabited since that time apart from the tourists who take day trips there by boat.

Speaking of sunsets, it's worth pointing out the time in the evening when you can see them. Today for example, the sun will set at 445pm and it rose this morning at 6:51am. Daylight saving time in Italy ended on the 27th October when the clocks went back, leaving us with the earlier sunsets and giving that extra bit of light in the morning. The shortest day in Italy (the day of the least amount of daylight), occurs around the 24th or the 25th December when the sun rises at 7:36am and sets at 4:44pm in the evening. During the summer, the sun sets as late as 8:49pm and rises as early as 5:35am each morning. Daylight saving time begins again on the 31st March 2014 when the clocks will go forward.

We'll be including the sun-rise and sun-set times at the bottom of each day's blog from now on and all of the information will be entered each day in to the Ischia Events Calendar along with each day's weather, Saint's/Name Day and famous event in history.

Ok that's all for today, as ever, if you have any questions about Ischia please don't hesitate to ask and we'll be happy to give you all the information you need.

Apart from that, enjoy your Saturday lie-in for those of you not working today, and those of you that are already at work, well it's Sunday tomorrow so not long to go now!