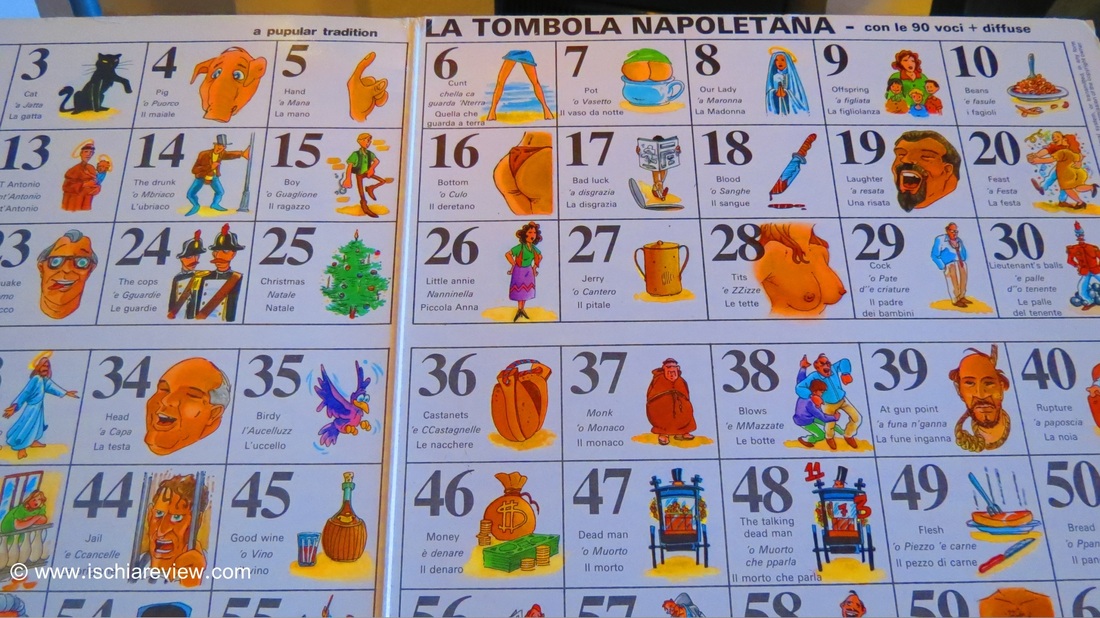 It's a beautiful start to the day in Ischia, at the time of writing the sun is slightly hidden behind Mount Epomeo but the skies are clear and those houses closest to the beach are already bathed in sunshine. Out to sea the waves are calm and rippling away without threat or menace. Love is in the air in the garden as a particularly amorous male cat has found a new quarry whom he is zealously pursuing, all in clear sight of his previous partner who he seems to have gracelessly discarded, shameful behaviour!

The forecast for the rest of the day looks very good, it should be mainly sunny with a little bit of scattered cloud here and there and temperatures are set to reach a high of 14° Celcius (57° fahrenheit) and a not so lowly low of 12°C (54°F). There could be a few drops of rain tomorrow but nothing too drastic by the looks of things.

Today's photo is of the wonderful "Tombola Napoletana", the traditional Bingo game that I mentioned a few days ago in the blog. The game itself is a lot of fun and can be played at home by the whole family. It can be played for money, usually small amounts, or if playing with children there are small prizes on offer such as sweets or fruit.

The game materials consist of a board of ninety numbers, each represented by a character, some of which are hilarious and I'll explain about in a moment. Each player is given a card with three rows of five numbers and the aim of the game is to check off those numbers as they are drawn from a specially-made container. Whenever a number is drawn from the container, players have to mark their cards either with a coin or more typically a bean for each number. Much like in Bingo there are prizes of varying values given at various stages, the first of those being for two in a row which is known as  "ambo", then three in a row which is "terno", four "quaterna" and five "quintina". The biggest prize is always reserved for the first person who gets all of the numbers who then declares "tombola!".

What first grabbed my attention about this game apart from the fun of playing it, were the characters ascribed to the different numbers. The board that we were using was handily translated from Neopolitan dialect into Italian and English with some hilarious results. The numbers and characters have been formed over many years of tradition and include some extremely quirky figures. It all starts fairly normally with number 1 being Italia, number 2 a little girl and number 3 a cat but starts to take a slightly strange turn by the time we reach number 6. In the photo above you can see that the number 6 is represented by a pair of female legs and if you look very closely you'll see in Italian "quella che guarda la terra" (that which looks at the ground), but your imagination doesn't need to stretch too far as to the meaning because the translation is written in English and in glorious technicolour, a four letter word beginning with C! I'm not quite sure who did the translation but at least the players are unlikely to forget to cross it off the list!

Some of the highlights on the board include number 22 "Il Pazzo" (the madman), number 33 "Gli anni di Christo" (Christ's age), number 47 "Il Morto" (The Dead Man), followed swiftly by number 48 "Il Morto che Parla" (The Talking Dead Man), number 77 "I Diavoli" (The Devils) ending at number 90 with "La Paura" (The Fear). My personal favourite is number 67 "o totaro int'a chitarra" (The Squid in the Guitar), while my childish side sniggers at number 30 "Le Palle del Tenente" (The Lieutenant's Balls), number 16 "Il Culo" (The Bottom) and number 71 "Uomo di Merda" (The Shitty Man)! There are plenty more strange characters besides and each with some equally colorful images to match, which all adds to the fun of the game.

For anybody who would like a full list of numbers I will happily send a photo or better still post some more images when this blog gets archived with its own page.

Ok that's all from me for today and I'll be back tomorrow morning with some more. We're off to the theatre later so I'll try and bring you some photos of that if all goes to plan.