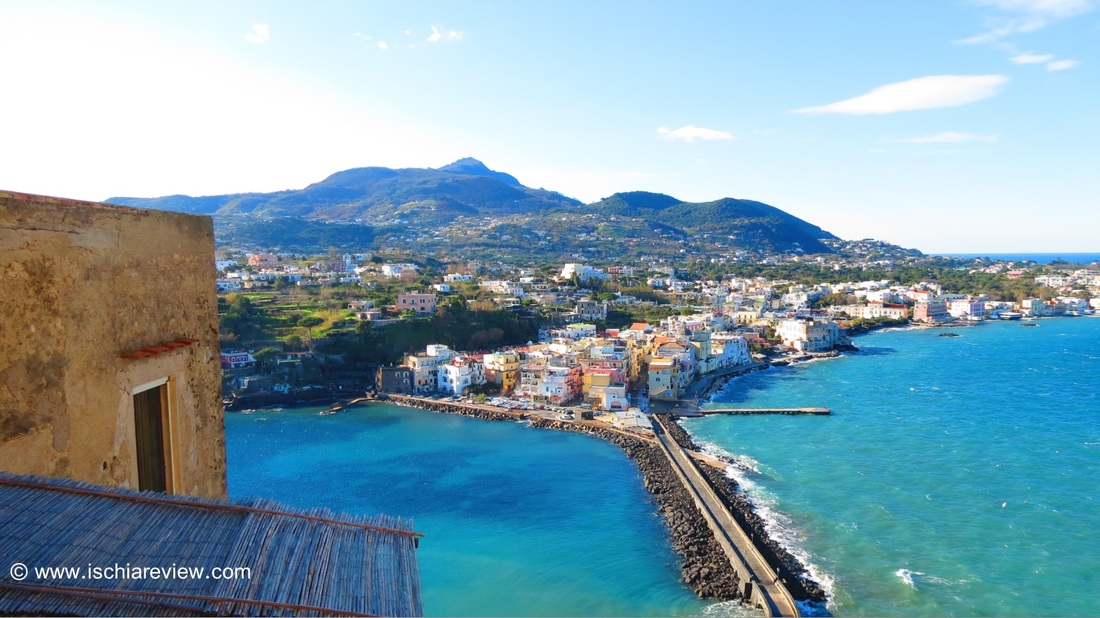 It's a lovely Sunday morning on the west coast of Ischia, we've got a few scattered clouds but for the most part the skies are clear and blue (I suppose those two things go hand in hand anyway but you know what I mean). The bright overhead conditions are once again making visibility very good and I can almost describe to you what's going on at the seafront of Ventotene some 25 miles away. In the foreground, the Tyrrhennian sea is beautifully calm as we have the lightest of breezes causing nothing more than a few ripples on the surface.

That light breeze is a marked contrast to yesterday when we had some very heavy winds to contend with, causing difficulties both on and off the island. When the wind-speed gets above 20-25 miles per hour there's always a danger that some of the hydrofoil crossings can be cancelled and that was the case yesterday. The morning services were unaffected but as the wind gathered in strength it caused disruption with the afternoon and evening sailings. It's worth bearing in mind if you're visiting Ischia on a day where there are potential storms or strong winds that the first services to suffer will be the hydrofoils. It's very rare for ferries to be cancelled as they are designed more for strength than for speed and can withstand all but the most severe of conditions.

Yesterday's winds also caused some light flooding in Ischia Ponte, making access between Castello Aragonese and the main town area slightly tricky. There were a few hardy souls out there yesterday who decided run the gauntlet of crossing the stone bridge between the castle and the mainland as the waves crashed against its sides, hurling buckets of salty sea water at random intervals on to the bridge and anyone brave enough to cross it. I can tell you the water was salty because I myself was one of those to time my crossing at just the wrong time and got a good soaking for my troubles, as did a couple of guests who I was with!

Anyway like I said, things are much calmer today and although there's a little winter nip in the air, it's nice and fresh outside and a great day for a Sunday stroll. Today's maximum temperature will be 12° Celcius (54° fahrenheit) and a chilly minimum of 8°C (47°F). The outlook for the early part of next week looks quite good with some more sunshine on the way and just the occasional shower but hopefully nothing too heavy.

Today's photo comes from Castello Aragonese where I was yesterday. You can't quite see the ferocity of the waves that were battering the stone bridge but what you can see is the magnificent view of the clear blue water and the town of Ischia Ponte beyond. A view like that is always worth getting a little bit splashed for don't you think?

Ok that's all from me today, have a great Sunday and keep your e-mails coming in, I try and make sure we reply within 24 hours at the maximum but if you've got something that needs an immediate response then you can always give us a call on our phone number at the top of the screen.