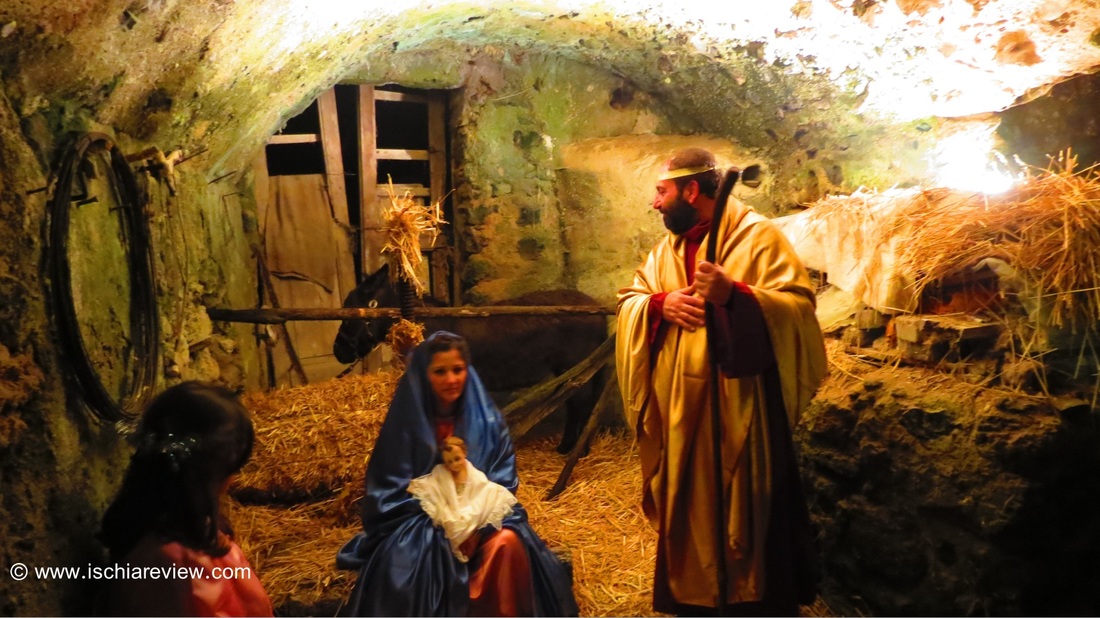 It's a slightly cloudy Sunday morning here in Forio but very pleasant nonetheless. There's a very light breeze that's prodding the air around but not with any real intent and it feels warm enough to be walking around without having to wear a jacket. The sea is calm and covered in patches of different shades of silvery blue where the overhead cloud varies in density. Temperatures today are set to be a maximum of 15° Celcius (60° fahrenheit) and a minimum of around 11°C (52°F).

Today's photo is of the "Presepe Vivente" (Live Nativity) that was held in the little village of Campagnano near Ischia Ponte last night. The event is much more than perhaps the photo suggests, far from being just a few people posing for a nativity scene, the whole village is transformed into a living museum dedicated to times past.

Last night, this usually very quiet district of Ischia became the focal point of the island's attention as large crowds gathered to celebrate the traditional annual event. From the town's entrance you stepped straight into a world that was from another time, the first evidence of which being the hay scattered all across the roads and the second being when you were invited to exchange your modern euros for some specially-made coinage with which you could buy food from the various stalls.

The village was organised in such a way that there was a suggested route you could take in order to see everything and the first step along that route happened to be the stall selling "Vin Brulee", a kind of mulled wine, hot and flavoured with cinnamon, the perfect internal defence against the slightly chilly evening air. The sense of being in a different world was heightened by the villagers dressed in their traditional costumes as they performed roles from a bygone era such as basket-weaving and carpentry.

Making our way around the town we eventually came across the live nativity, (complete with a real donkey) in a small cave. Along the candle-lit path we passed three wise men fresh from delivering their frankincense, gold and myrrh and nipping off for a well-earned snack and then walking back along the same path I momentarily felt myself in Scotland as I heard the sound of bagpipes reaching ever closer, but these were not tartan-clad pipers, instead the traditional Italian kind.

There was also lots of food on offer (as you'd expect) from the various stalls, including different types of pasta, grilled sausages, polenta and some fantastic sweets including doughnuts and other cakes, all freshly made. All in all a very enjoyable experience and one not to be missed by anybody lucky enough to be visiting the island at this time of year.

It's quite a busy time in terms of events and this evening the festive programme continues with "Nottebianca" (White Night) in Ischia Ponte where shops stay open late and there is live music, dancing and general merriment to be had.

Ok that's all for today, I'll be back with more tomorrow morning and have a great Sunday wherever you are.