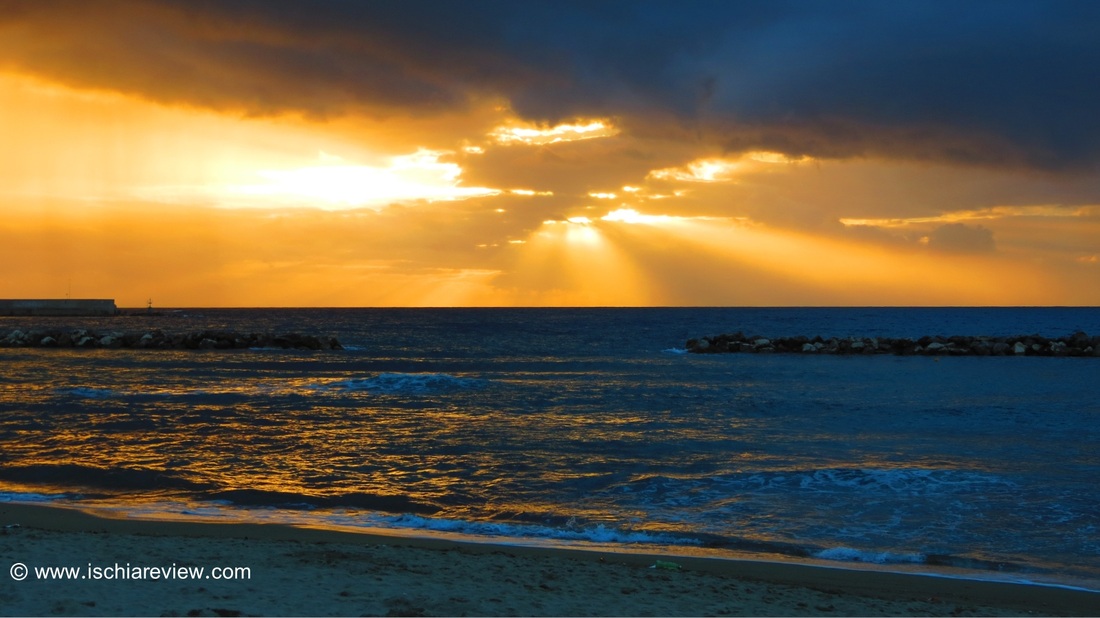 We've had a stormy start to the day here in Ischia, overnight the island has been battered by some strong winds and accompanying rain. Looking out to sea at the moment there's a huge cavalry of white horses galloping as the water shakes to produce a frothy head on the dark blue cocktail below. That all said, the worst of the storm seems to be over and things are gradually calming down again. Temperatures today should see a maximum of 16° Celcius (62° fahrenheit) and a minimum of 12°C (53°F) with brighter prospects for tomorrow.

As mentioned in yesterday's blog, it's a long weekend in Italy as the country celebrates Epiphany with a national holiday tomorrow. The 6th of January sees a tradition that most English-speaking countries see very little of, apart from the day off there's also the presence of "La Befana", the witch who delivers gifts in the night to children all over Italy. If the witch thinks the children have behaved well she'll reward them with some sweets but if they were deemed to be naughty they'll end up with nothing but an old lump of coal for their malevolent efforts.

So where has this tradition sprung from? There are theories that the name itself derives from the Italian word for Epiphany which is "Epifania" and over the years has evolved into the similar-sounding "Befana". Legend has it that just a few days before the birth of the baby Jesus Christ, the Three Wise Men came across La Befana and asked her for directions to where they could find the newly-born infant. The witch didn't know but gave the three kings shelter and board for the night nonetheless. The following day, the grateful Magi invited La Befana to travel with them in search of the chosen one but she declined the offer as she was too busy with her housework. She later had a change of heart and decided to seek out the Three Wise Men as well as the baby Jesus but was unable to find any of them. The story goes that the witch is still searching for the baby to this day and during her travels she leaves various gifts to children in socks or stockings that they wake to find the following day.

There are many theories about where the legend really came from, another one states that La Befana was a normal woman whose own child died and she became delusional that the baby Jesus was her own son. When she found Jesus he gave her a gift in return, telling her that she would be the mother to every child in Italy.

Stories and theories abound and we'll never know the real answer I suppose but it's a great tradition anyway and something extra that adds to the whole magic of Christmas time in Ischia with the festive period extended that bit further.

Ok that's all from me today, have a great Sunday wherever you are and I'll be back with more tomorrow.

Today in history: The US breaks diplomatic relations with Cuba (1961)