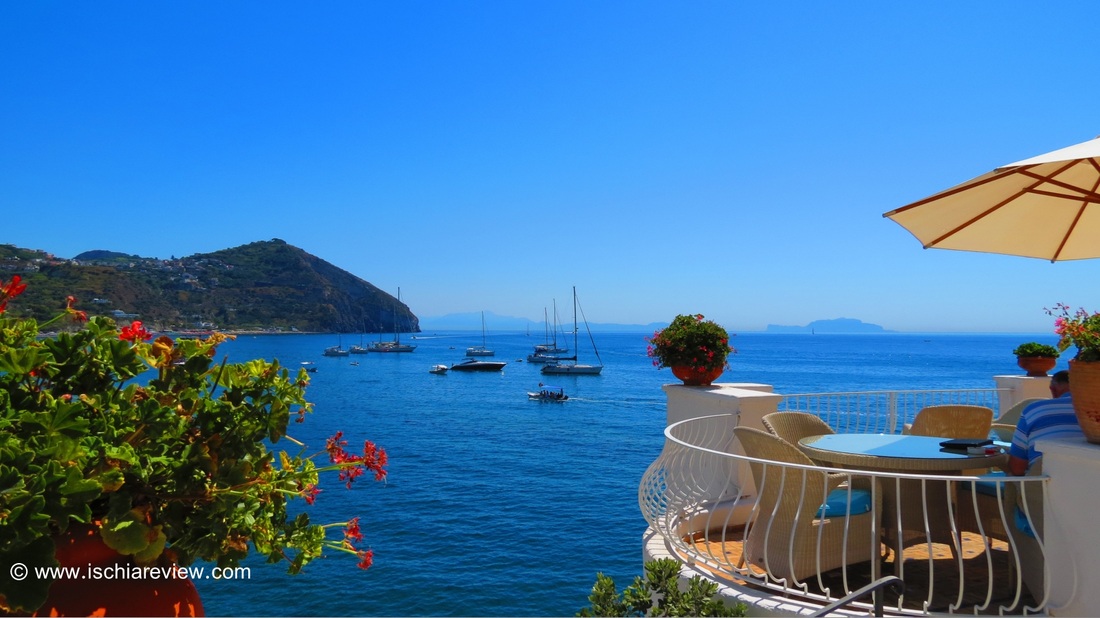 It's a glorious start to the day with bright sunshine lighting up the island and we look set for a great day with just a few light clouds around to add a little bit of character to the sky. Yesterday's strong winds have calmed down significantly and have been replaced by a light breeze. The maximum temperature today should be similar to what it was yesterday, around 21° celcius (69° fahrenheit) and then dropping to around 15°C (60°F) this evening.

Today's photo is of the Miramare Sea Resort & Spa in Sant'Angelo. The beautiful 4 star hotel is located in the centre of the village and overlooks the beaches of Maronti and Le Fumarole.

Guests who are lucky enough to stay at the Miramare are treated to breakfast on the balcony with one of the best views on the island and this view is shared once a year by none other than the German Chancellor Angela Merkel. Every Easter, Merkel and her husband Joachim Sauer make a beeline for Ischia to stay at their favourite place on the island.

Last year's visit caused headlines around the world for several reasons, one of Ischia's main attractions is the thermal water that can be enjoyed at the many spas and thermal parks, and it was on just such an outing when the German premier was snapped by a paparazzi in her swimming costume with slightly unflattering results that were subsequently broadcast around the globe!

The other story from last year's visit concerned one of the staff members at the hotel, or more pertinently, an ex member of staff. Cristoforo Iacono had been working at the hotel for 40 years before falling out with the hotel management and leaving his position prior to Merkel's visit. The Chancellor was upset to learn of the 59 year old's departure from his position as she had become friends with the man who had looked after her so well on her previous visits. Despite her large security and journalistic entourage, Merkel and her husband managed to briefly escape and paid an impromptu visit to the home of the former employee.

Headlines in the world media hailed this act of kindness and Mrs Merkel was praised for her humanity and kindness. The visit was said to have lasted around half an hour or so but will live long in the memory of the Iacono family who had the pleasure of hosting their distinguished guest for her surprise visit. The premier and her husband are expected to return to Ischia next Easter so we will see what kind of stories her next trip turns up.

Slightly changing tack, I should point out to anyone that's travelling to or from Ischia tomorrow that there's a transport strike in Naples during the morning, from 9am to 1pm. The strike will affect the Metro, buses and funicular railway system but travellers should be able to make their way to and from the ports, airport and train stations without too much disruption as taxis will still be in service.

Ok that's all for today, if you have any questions about tomorrow's strike or about Ischia in general then drop us a line and we'll be happy to assist. Apart from that, have a great day wherever you are and make sure the house is tidy as you never know who might drop in for a cuppa!