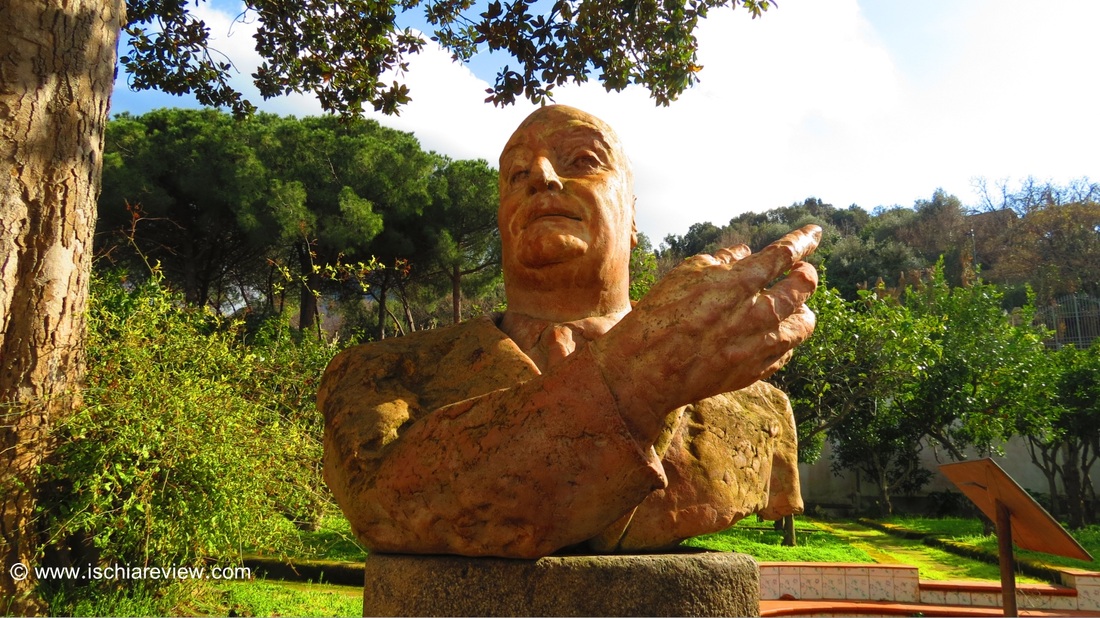 Once again we wake up in our little corner of paradise with the sun in the sky, the light twitter of birds in the trees and the sight of the calm sea not far from our window, another wonderful day in Ischia beckons. There are a few wispy clouds around but today we'll have mostly sunshine and temperatures of 22° celcius (72° fahrenheit) this afternoon and around 19°C (66°F) this evening which is slightly warmer than yesterday at both ends of the scale.

Today's photo is the bust of Angelo Rizzoli which proudly sits in the garden of his former home on the island, Villa Arbusto. "Who is Angelo Rizzoli?" I hear you ask, well for many people, he is the patriarchal figurehead who transformed this once sleepy island that relied on fishing and agriculture for the major part of its income into what is today recognised as one of the foremost holiday destinations in Italy.

Angelo Rizzoli was a legendary Italian film producer who arrived in Ischia in the 1950's and became so charmed by the place that he decided to set up home in Lacco Ameno. An entrepreneur with fantastic contacts from the worlds of politics, business and entertainment, Rizzoli used all of his resources to set about his project of creating a chic attraction for wealthy tourists of the day. He started by building the first hotels on the island and continued by improving the infrastructure such as the hospital in Lacco Ameno which still bears his name.

Ischia's film legacy is also partly attributed to the name of Rizzoli as he encouraged film-makers to use the island for their productions as well as his own, contributing to the total number of feature films made on the island reaching around 30. By attracting stars such as Richard Burton and Elizabeth Taylor to his hotels and his home, Rizzoli was the catalyst for change on the island and others have followed suit over the years, creating the modern island paradise that we all enjoy today.

Around twenty years ago, Villa Arbusto became a museum and today it houses two distinct types of exhibit. Part of the villa pays tribute to Rizzoli's time on the island with a fascinating collection of memorabilia, from film-posters to awards and photos of the director posing with actors, acrtresses, politicians and businessmen of the era. The other part of the museum is dedicated to ancient times when Ischia was colonised by the Greeks, from around 750BC to the time of the Romans. A large selection of artefacts such as tools, jewelry and pottery are on display but perhaps the star of the show is "Nestor's Cup", a small urn which bears one of the very earliest examples of written Homeric poetry.

The museum's gardens are also a joy to behold with some fantastic views of Lacco Ameno, the sea and beyond so if you're nearby it could be a very pleasant way of spending a few hours and soaking up some of the island's history. For more information about Villa Arbusto click here or drop us a line if you have any questions.

Anyway, that's all from me for today, have fun wherever you are and remember we're here if you need any help.