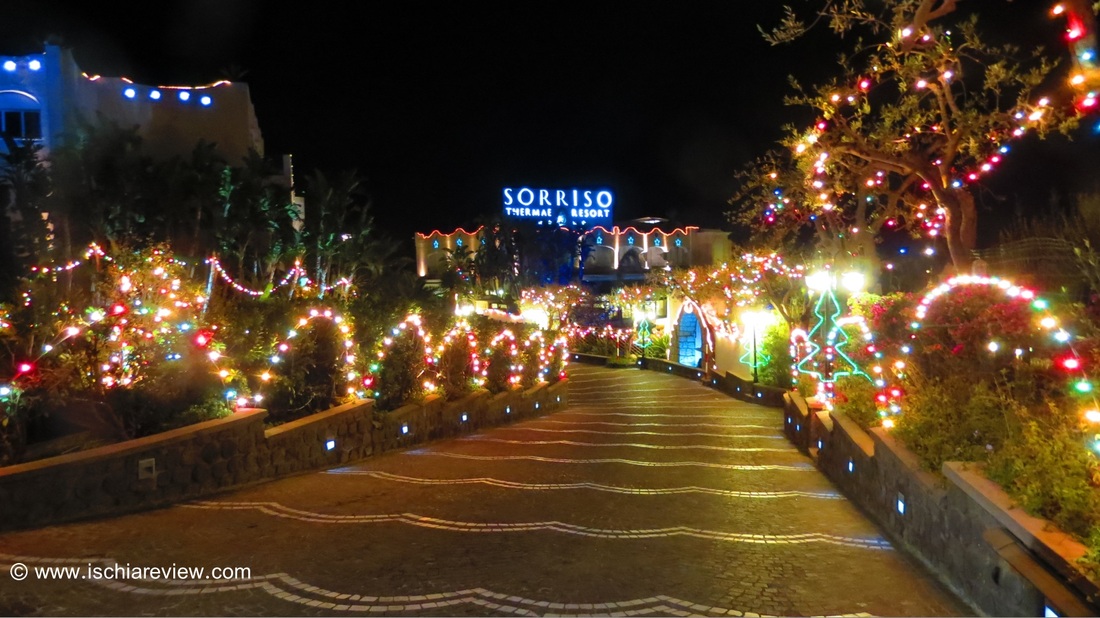 Having taken a brief tour of the garden there is much to report on the morning's activity - the first thing to note is that it's an absolutely glorious start to the day with unbroken swathes of blue sky up above and looking out to sea there's hardly a ripple in the water, resembling a freshly-polished glass table. Visibility is a bit low but I expect that to clear up as the sun rises higher. The main source of noise this morning is coming from several cats who've decided to play on the roof and that apart the scene is a picture of calm.

Looking slightly further down this page you'll note the weather outlook for the next three days is exactly what you would hope to find with three bright sunshine icons and today's temperatures are for a maximum of 16° celcius (62° fahrenheit) and a minimum of 12°C (54°F) which is more or less how it should stay for most of the week.

For today's photo I've chosen the fantastic Christmas decorations from the Sorriso Thermae Resort in Forio, overlooking the bay of Citara. Although the majority of hotels on the island are closed for the winter period, those that are open have really entered into the Christmas spirit with some beautiful displays of festive lighting. In Italy, the Christmas decorations are traditionally put up around or just after the 8th of December with most houses having a tree with baubles, much in the same way as you'd expect to find in most English-speaking countries.

Travelling around the island over the last few days one can't fail to be impressed by the lights decorating some of the hotels, apart from the aforementioned Sorriso, the Hotel Gran Paradiso has really gone to town with their display and you'd be forgiven for thinking you were in Las Vegas (albeit very briefly!) when gazing up at their illuminations in Casamicciola. The towns of Barano and Ischia Porto also have some beautiful decorations and I'll be bringing you some more photos of those soon.

It's not just the hotels and town centres where you'll find the lights though. The island is gradually becoming an ever more brightly-coloured beacon with the outdoor illuminations on the houses adding to the general festive feeling with all kinds of flashing, twirling displays to be seen everywhere you go.

I am still waiting to bring you details of the ice-rink in Ischia Porto, it's been erected for a few days now and was due to open on Saturday night but for some reason remains closed. Rumours abound as to why that may be, including one that says they're struggling with the warm temperatures that we're having although I must stress that at this stage that is only a rumour rather than opinion or fact!

Ok that's all from me today, drop us a line if you have any questions and if not I'll be back with more tomorrow.

Today in history: The first traffic lights installed in London (1868)