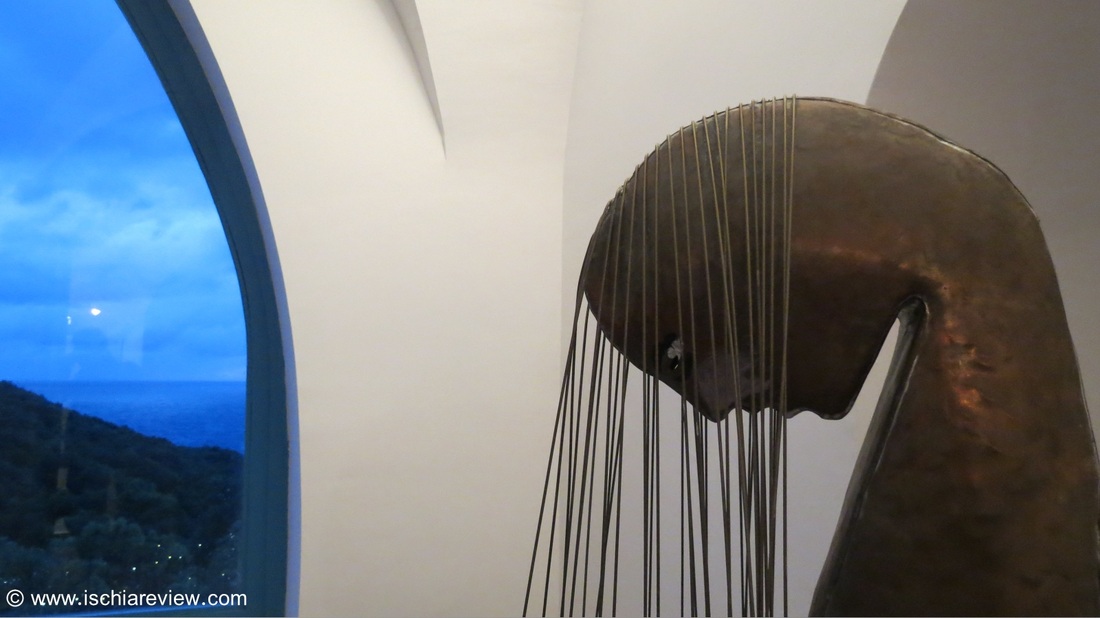 We wake this morning to the sight of blue skies and the sparkling reflection of the sun on the water out at sea. A welcome change from the seemingly endless rain of the past few days, we are however left with strong winds that are thumping into the windows and creating a cavalry of white horses galloping over the waves in the distance. For the rest of the week we seem to be heading towards a much more settled phase where the winds will gradually die down and leave us with some much calmer conditions. Temperatures today should be a maximum of 15° celcius (58° fahrenheit) and a minimum of 11°C (52°F).

Today's photo is one of many from our collection of images taken at the magnificent La Colombaia Museum in Forio. The beautiful villa was once the home to the famous Italian film director Luchino Visconti whose life and works are chronicled in what is now a museum full of remnants of the rich tapestry that was his life. In fact, calling La Colombaia a museum almost doesn't feel right because walking around the elegantly decorated rooms and looking at some of the wonderful photos on display, you feel a great sense of warmth and that you really are in a home rather than a cold and clinical museum.

In many parts of the world the name of Visconti is known only to real movie buffs or devotees of his work, but here in Italy he was a hugely important figure who was a regular winner at the Cannes and Venice film festivals. Amongst his most famous films are Il Gattopardo (The Leopard) 1963, and Death in Venice (1971). He worked with some of the biggest stars of his era including the likes of Burt Lancaster, Dirk Bogarde and Alain Delon to name just a few, and the villa that was once his home is now full of photographs and other memorabilia that pay homage to his life and career.

The building itself is a grand, white villa that sits in an elevated position in the area known as Zaro which is one of the most sought after spots on the island, located between Forio and Lacco Ameno. The views are incredible and you can easily spend a few hours walking around the beautiful garden and exploring the cavernous halls and rooms inside the villa, before taking a coffee out on the veranda with its antique furniture. The area around the villa is worth a visit in its own right with a mixture of sheltered woods and some delightful little bays where you can gaze down at the brightly coloured water or the waves crashing against the huge rocks.

The walk from San Francesco Beach to La Colombaia is around half an hour or so but certainly worth the effort to give you a break from all that sunbathing! We've got lots more information about Luchino Visconti and the villa, so if you're interested by this little snippet you can read more and see all of our photos by clicking here.

Ok that's all from me today, I'll be back with more tomorrow  from a windswept Ischia!

Today in history: The telescope is invented by Galileo (1621)