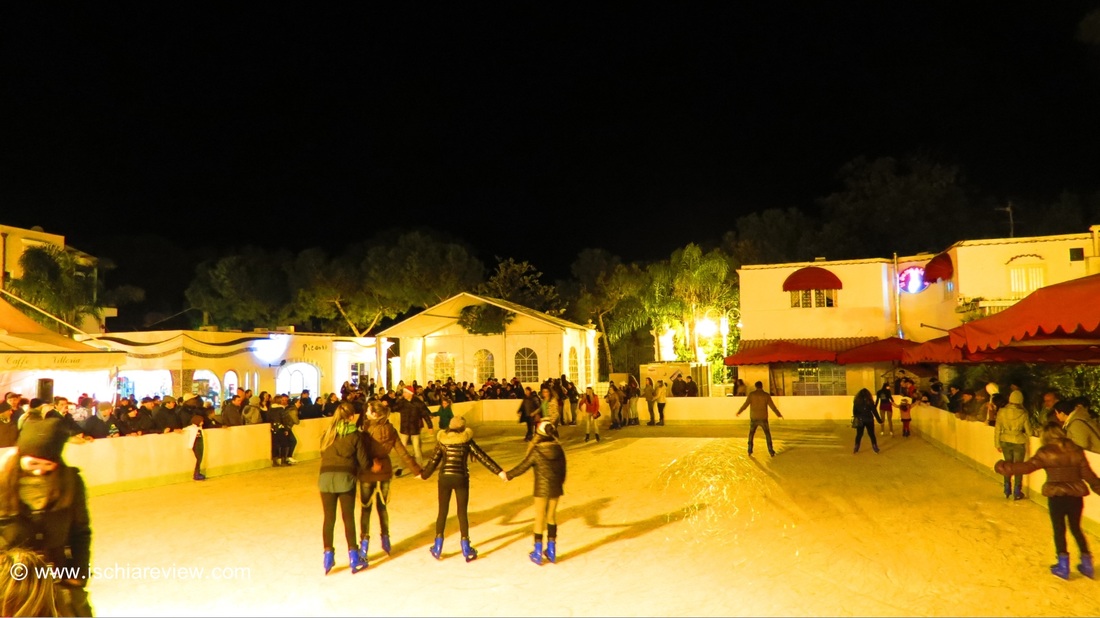 It’s a beautiful, crisp, late-autumnal morning here in Ischia with the sun gradually rising, the birds singing merrily in the trees and a palette of brown and orange shades dominating the garden as the leaves intensify their mass downwards departure. The sea is a picture of calm and the air is cool without being cold enough to see that steam when you breathe out into it. The weather outlook for the next three days remains excellent with nothing but sunshine predicted and warm temperatures raging from  a maximum 16° celcius (61° fahrenheit) and a minimum of 12°C (54°F) making it feel like spring has arrived very early.

Despite the warm temperatures, the island feels extremely festive. The decorations alluded to in yesterday’s blog have helped to create a really Christmassy atmosphere, but nowhere on the island sets that traditional scene more than the marvellous ice-rink in Ischia Porto which you can see in today’s photo.

After a few days slight delay the 20 x 30 metre ice-rink (“pista di pattinaggio” in Italian) was ceremonially opened yesterday at 6pm by local dignitaries before the general public were finally unleashed onto its slippery surface. Remembering that Ischia is an island in Southern Italy with a Mediterranean climate, the wonder and novelty value produced by this unexpected facility was tangible amongst the crowd who gathered to watch and/or participate.

First on the ice were a group of very professional-looking young skaters who I can only presume live elsewhere in a colder place or a town with a permanent ice-rink, such was their dexterity, after all how would someone from Ischia learn how to ice-skate when this is the very first time there has been somewhere for them to learn or practice? The young skaters helped the paying customers on to the ice and held their hands as they gingerly made their way out in to the middle, much to the hilarity of their friends who would heartily cheer every time one of them took a tumble!

Watching those first few pioneering skaters it was difficult to draw any comparisons with Torvill and Dean, but without fail, the huge smiles on the faces of everyone who donned a pair of skates were evidence that this is something that’s going to prove very popular with islanders and visitors alike for the next month or so.

For anybody who fancies giving the skating rink a try, it’s located at Piazza San Girolamo along the main shopping street in Ischia Porto, Corso Vittoria Colonna. It’s open from 10am to 10pm and costs €7 for non-residents (including the hire of skates) for half an hour. The rink should be in position until the middle of January, but if it proves too popular they might just have to build a permanent one somewhere as well!

Ok that’s all for this morning. Have a great day wherever you are and just drop us a line if you need to know anything about the island.

Today in history: The Mona Lisa is recovered after being stolen two years earlier (1913)