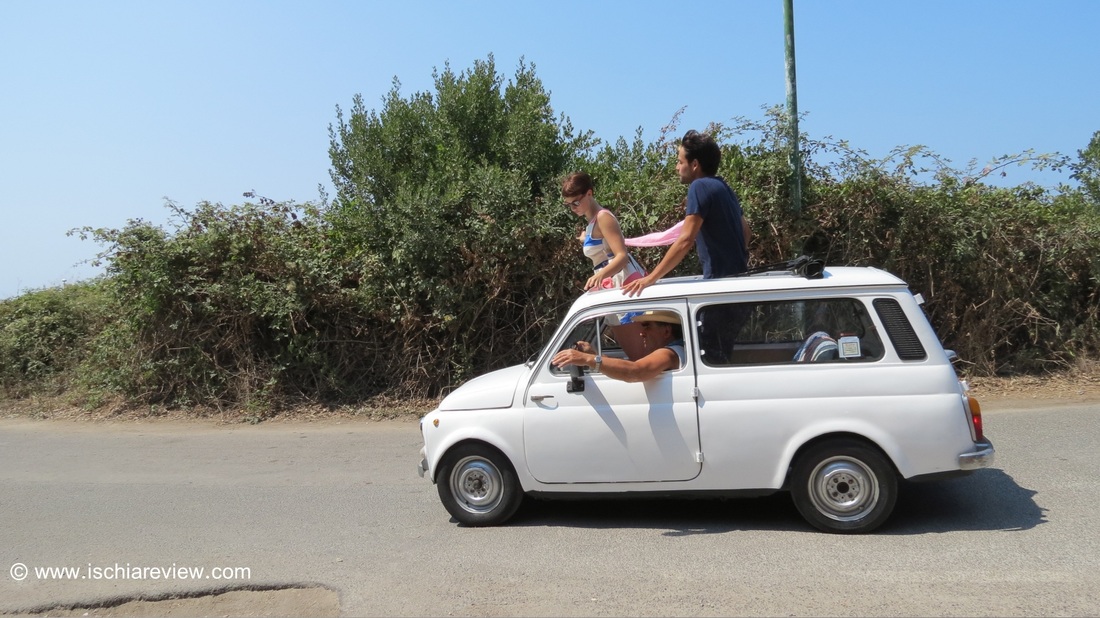 The Hooverphonic Video for their single "Amalfi" shot in Ischia

As predicted yesterday we've got another fabulous start to the day in Forio. There's the tiniest puff of cloud sitting behind Mount Epomeo but looking in every other direction all I can see is bright blue unblemished sky. Sometimes in the mornings it's a little hazy out to sea with low visibility and that's the case again today but there's hardly a breath of wind and from the bits that I can see it's all looking very calm. The cherry tree in the garden has finally shed its final leaves and is now completely bare and apart from the overhead conditions it's looking quite wintery now.

The outlook for the next few days remains very positive with similar conditions expected for the rest of this week. The maximum temperature for today will be up around a very pleasant 16° Celcius (62° fahrenheit) and a repeat of yesterday's minimum of 13°C (55°F) meaning we still don't need the heating on at night!

Today's photo is from one of my favourite events of last summer, the shooting of the (dare I say the word "controversial"?) Hooverphonic video. We were approached by the group's management company as they had decided to film in Ischia and they needed some help to find various locations and props. Of course we were delighted to help and get involved with something a little out of the ordinary from our regular day to day activities. The film crew having explained the story of the video and their filming requirements, we then set about tracking down some of the things they'd asked for.

The props we were asked to find included smoke bombs, old Italian records and various vehicles. As explained on a recent blog update, Ischia is no stranger to fireworks with regular displays throughout the year for special occasions or parties held by hotels so the smoke bombs were fairly easy to find by contacting a local firework supplier, in fact that in itself was a lot of fun as they showed us the various types of smoke we could use with some very unexpected indoor displays taking us a little by surprise! Also required for the shoot were an ape truck ("ape" meaning Bee in Italian), you know the little agricultural one-seaters with noisy engines, not a big problem to find one of those on Ischia as they're one of the most popular modes of transport on this hilly island.

The greatest challenge proved to be finding the thing I thought would be the easiest of all, a Fiat 500. There are lots of these beautiful old cars on the island but they are cherished and jealously guarded by their owners, rightly so as they may have been in the family for 40 years or more in some cases and given lots of loving care to keep them in working condition. So finding one wasn't the problem, persuading somebody to part with one for the day was a different matter. Having exhausted lines of enquiry with friends, relatives and friends of friends we grew frantic trying to find an available car, at one stage I even tried following cars as I spotted them out and about but without wanting to cause an accident it was a little bit difficult to communicate with the drivers as we were both picking our way through the traffic! Our search finally came to an end after leaving a business card on a beautiful white convertible when the owner contacted us and agreed to let us use his prized possession for the day's filming.

I mentioned the word "controversial" in relation to the video for a reason. Once the filming was over we waited a couple of months for the official release of the new single at which point the video was due to be released. What we didn't realise when we were shooting was the name of the song was "Amalfi". For various production reasons it was decided that the main body of the filming should be done in Ischia rather than in the town that the song was named after. No problem there as Ischia has been used as a location in many films including Cleopatra and more recently The Talented Mr Ripley where the scenes featuring the fictitious "Mongibello" were filmed in Ischia Ponte and the neighbouring island of Procida. The controversy only began when somebody noticed the mistake on the production credits which stated the video had been shot on location on "The Amalfi Coast" rather than Ischia. The video started to go viral on the island as it was obvious to everyone who lived here or had ever visited that it wasn't shot on the Amalfi Coast and the islanders rightly wanted the credit for the beautiful scenes that came out.

The controversy reached its peak when we found photos of the video had reached the front page of the local newspapers and the story had even spread to the national press who were amused in some quarters and angry in others at this "gaffe". The problems were all resolved when the band's management company realised their error and put it right by changing the credits on the video. The controversy and the efforts were all worth the trouble though as we got to meet some wonderful people with the group's singer Noemie Wolfs, the crew and the management team now firm friends of ours and all newly addicted devotees to Ischia. Apart from that the video itself is a fantastic watch and shows some new sides to the island which are not always captured by the tourist photos and is a testament to the skill of the production crew. You can see a link to the Amalfi video here but be warned not to watch it too many times as that great tune will be stuck in your head for months!

Anyway, I just wanted to share those great memories from last summer as it's such a beautiful day today. I'll be back tomorrow with more but keep all of your e-mails coming in as we love hearing from you all and helping you with information about Ischia.

Have a great day wherever you are.