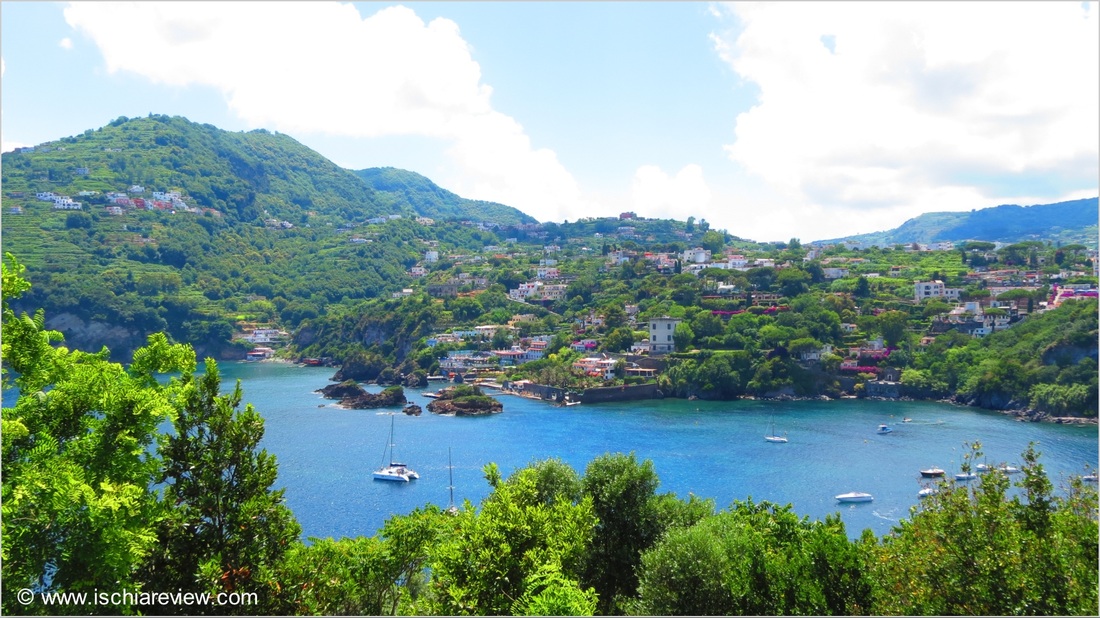 Welcome to our weekly Ischia blog, Ischia on Sunday. Here you can see the entry for Sunday 13th July 2014
Good Afternoon Ischia!

I hope you're all enjoying a nice, relaxing Sunday. Last week I suggested that you could forget about looking at any weather forecasts for the next few months but it turns out my statement was a little premature. With several days out on the water planned for the next week I've been studiously poring over the data for wind and rain predictions as we seem to have hit an untimely and surprising spell of unsettled weather on the island. Right now it's half cloudy, half sunny but there are also a few drops of rain on the way.

Although temperatures remain somewhere between a minimum of 20° Celcius (68° Fahrenheit) and a maximum of 30°C (86°F), there will be the odd shower, some clouds and perhaps even a little storm tomorrow night, but then by Friday we should see a more predictable pattern of sunshine and heat.

Looking back over the previous week it's been busy as ever, a brief visit to Rome was followed by a return to Ischia with all sorts of things going on. My time at the moment is divided by arranging services or answering queries while at the same time looking to add more to the website. For example, we're steadily increasing the number of apartments, villas, bed & breakfasts and hotels in Ischia so that visitors to the site get the widest possible choice of accommodation, while at the same time adding new ideas for things to do while you're here such as jeep rental (Mini Moke rental) which has already proven to be very popular.

We've also been involved in some way or another in the planning of three weddings that are about to take place between Monday and Wednesday next week. Although there are no doubt lots of nerves involved for the six about-to-be-newly-weds, for us there's lots of excitement in getting involved in what are such important moments in these couples' lives so we're desperate to do the best job we possibly can and to make sure they are all memorable and unique occasions. In fact all three weddings are unique and take place in some great locations such as the Cathedral in Castello Aragonese, Punta Chiarito Resort in Panza and even out to sea in a boat! Whilst I'm on the subject I'd like to give my personal best wishes to all of the couples involved (in chronological order of when the weddings will be taking place), Robert & Melonie, Jeff & Lorraine and Ashley & Becky who will all be tying the knot next week. Best of luck to all of you!

Staying on the subject of events, film fans will be pleased to know that the second of Ischia's annual film festivals is now under way. The Ischia Global Film & Music Fest 2014 opened yesterday with a free screening of the film "Living Legends" by Niki Iliev at the Regina Isabella Hotel in Lacco Ameno, and continues for the next week. Apart from the Regina Isabella, there are three other locations where you can turn up on a first come - first served basis to watch the movies for free, the Cinema Delle Vittorie in Forio, the Cinema Excelsior in Ischia Porto and at the Piazza di Santa Restituta in Lacco Ameno. In an effort to make things as easy as possible for visitors, we've put together a list of the films on our Ischia Global Film & Music Fest page with times and locations. The films are almost entirely in their original languages and with subtitles in Italian where appropriate.

Some people may question the need to have two film festivals in such close proximity as it was just last week that the Ischia Film Festival closed, but there are some differences between the two. Whereas the Ischia Film Festival tends to celebrate some of the lesser lights of the industry including up and coming directors as well as those involved on the technical side of things, Ischia Global focuses a little more on some of the more established personalities within the industry and as such attracts a greater number of celebrities. To drop just a few names associated with Ischia Global over previous years we've seen the likes of Nicolas Cage, Samuel L Jackson, Sylvester Stallone, Kevin Costner and Nastassja Kinski, while already this year we've seen the arrival of  award winning American actress Jessica Chastain while any Game of Thrones fans out there will be interested to hear of the impending arrival of the show's conniving Cersei Lannister, played by the English actress Lena Headley who I'd like to think is slightly nicer when she's off screen, we'll have to wait and see on that one! No doubt there'll be more stars arriving over the next few days and we'll keep you up to date with all the gossip as it happens on our Facebook page.

Today's photo comes from the Game of Thrones-esque (arguably a tenuous link) gardens of Castello Aragonese looking across the water to the pretty Cartaromana Bay. In the left hand corner you can see the small cove of Cartaromana Beach and slightly to the right, the famous Rocks of Sant'Anna in front of Michelangelo's Tower. I chose this photo because it really shows how lush and green the island is, surprisingly so considering its warm climate but aided by all of that volcanic activity beneath which gives it its famous thermal water and spas.

Ok that's all from me for this week, I might go and treat myself to a quick dip down at Citara Beach and get myself nicely in position for tonight's world cup final. As an Englishman it's a bit difficult knowing who to support when you consider how much footballing misery both Germany and Argentina have piled on us over the years but I'm prepared to bury the hatchet and hope that the little genius with an English first name gets his hands on the trophy, but only if that happens without any "hand of god" moments involved.......

Keep all your e-mails coming in by the way and don't be afraid to ask if there's anything about Ischia you need to know, we're here to help and happy to do so.