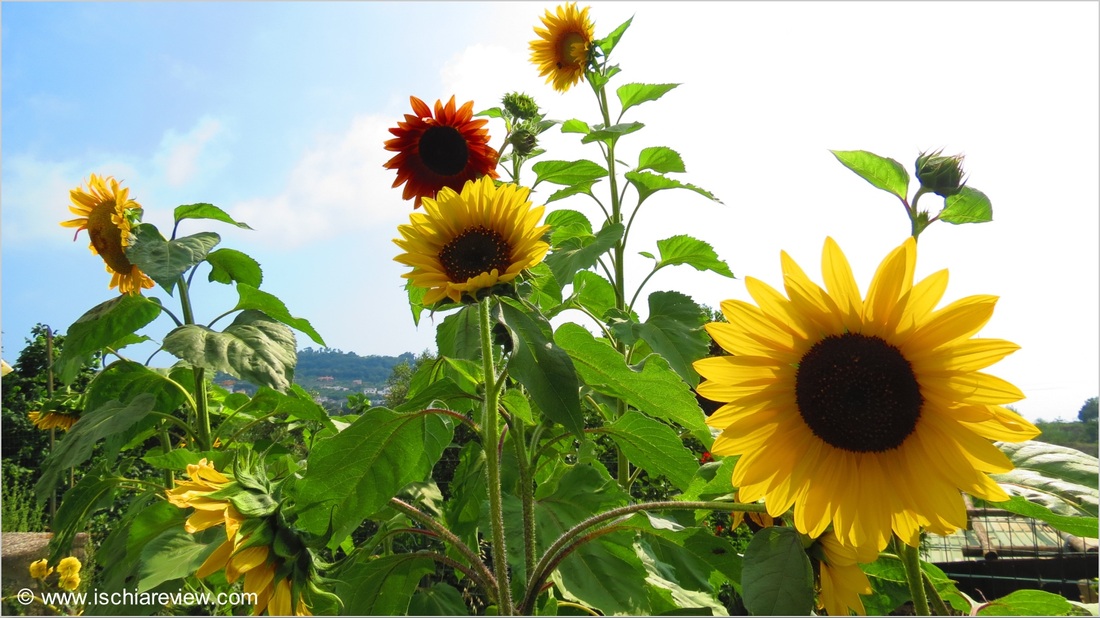 Sunflowers in the Ischia Garden

Welcome to our weekly Ischia blog, Ischia on Sunday. Here you can see the entry for Sunday 15th June 2014
Good Evening Ischia!

It's a hot and sticky Sunday afternoon here in Forio. After a period of 3 or 4 weeks without any rain we're finally starting to see a bit of movement in the sky, we had a few drops yesterday and the forecast for the next few days looks a bit unsettled with some light storms and rain showers expected. The temperature has dropped a little bit as well, it was above 30° Celsius (86° Fahrenheit) every day last week but it will be down to a cleaner and cooler 25°C (77°F) for the early part of next week.  Beyond that things should start to heat up again soon as summer arrives on our doorstep.

Speaking of summer, I can think of no greater indicator of the season than the giant sunflowers as seen in today's photo. These giant specimens have been rapidly taking shape in our garden for the last couple of months and are now in full bloom. The flowers are known as "Girasole" in Italian, "gira" meaning "turn" and "sole" meaning "sun", referring to their curious habit of following the sun throughout the course of the day. We've got a nice collection of traditional as well as red sunflowers and they add a lot of character with their 2 metre height and bright colours.

Away from matters relating to the garden, today is a very important day in the calendar, known as "San Vito". The patron saint of Forio is honoured at this time every year with all sorts of celebrations including church masses, market stalls, fun-fairs, processions and fireworks. The celebrations last for 4 days from the 14th to the 17th of June with today, the 15th being the most important of those. I've just been down to the town and seen the bands playing at the head of the parade, complete with standard-bearers carrying the silver statue of San Vito. This evening's festivities will continue long into the night with a big firework display that will be enjoyed by the thousands of visitors that are already lining the streets.

For anybody that reads our facebook page you would have seen the article written by Silvana yesterday where she explained why San Vito is the patron saint of Forio. For those that haven't read that article, the legend comes from a story that surrounded a plague that struck Ischia many hundreds of years ago. Legend has it that nobody knew how to cure the plague until one day an unknown ship arrived in Ischia Porto bearing a cargo of sulphur. The sailors couldn't explain how they had arrived on the island and knew nothing about what they had been carrying with them. The only explanation given was that they had all had a dream about a young child called Vito who had sent them to Ischia with the life-saving sulphur, creating the legend of San Vito.

Actually it's great to see Forio so full of life and colour provided by the bright neon lights and the stalls selling everything from candyfloss to hot-dogs. Also providing an extra splash of colours are the red, white and green tricolours which are out to show support for Italy in the World Cup which started earlier in the week. As an Englishman it pains me to have to mention the football after last night's defeat at the hands of the country that hosts me but I have to give them grudging respect for a victory that was just about deserved, despite an encouraging performance from England. Anyway, it's still early days yet and who knows, they may meet again before the tournament is finished. Having said that, I'd be quite happy if they didn't have to play each other again if only to avoid the awkward household moments when either team scores providing pleasure and pain in equal measure to different corners of the room!

Ok that's all from me for today, it's been a very busy week and next week promises to be busier still as we head towards the summer season. Keep your e-mails coming in and don't be afraid to ask if you have any questions about Ischia, we're always very happy to help in any way we can.

Happy San Vito to all the Vito's out there, (including the one I forgot to say "auguri" to earlier this evening!)