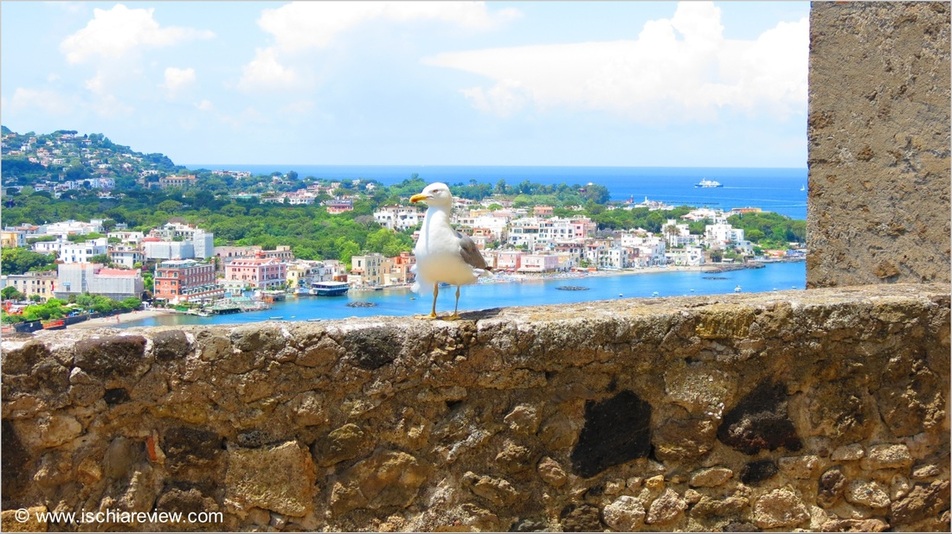 Welcome to our weekly Ischia blog, Ischia on Sunday. Here you can see the entry for Sunday 17th August 2014.
Good Evening Ischia!

It's early evening here in Forio on the west coast of Ischia. Behind me the sun is making it's leisurely way down towards the sea just in time for an early evening dip, while the imperious Mount Epomeo glares at me silently through all 788 metres of its stony face.

Above there is nothing but the purest blue sky and the only thing breaking the silence is the rustle of some leaves on the trees in the garden, being lightly caressed by a gentle summer breeze.

This picture of tranquility is in contrast to events further down below us where the beaches are starting to empty on what has been one of the busiest weekends of the year. Friday the 15th of August was the day known as "Ferragosto" in Italy which is a public holiday throughout the country. The week before and after Ferragosto are when many businesses up and down Italy close for a week or two to let their staff have a holiday and many of those people decide to head down south to the beaches, restaurants and hospitality of Ischia.

This all means that for most of the month of August and particularly the two weeks in the middle, the island goes into party mode with all sorts of festas (parties) and sagras (types of fetes or fairs) going on in the villages, restaurants, bars and hotels. We live in an area where there are lots of hotels around us and are regularly treated to fireworks and live music events going on all around us, and this week there have been occasions where we've been able to hear the music from three or more parties at the same time. Whilst it's not what you'd describe as harmonious surround sound, it is however quite fun to hear and it always sounds like the party-goers are having a great time.

So looking ahead to the next seven days it should be more of the same thing, just taking a cursory glance at the calendar for the next week I can see there will be a grilled sausage and wine (although it reads as such, this doesn't mean grilled wine) evening in Panza tonight with some traditional folk music, a potato festival on Thursday night and a pizza festival on Saturday night, both in Forio. For anybody who happens to be in Ischia at the moment I would highly recommend these and any other similar evenings that you see advertised as they are always accompanied by great music, food and of course wine! If you're not sure exactly when and where to go, just drop us a line and we'll be happy to point you in the right direction.

I can't let this week's blog go by without giving a mention to the Tropical Thermal Park in Sant'Angelo. As a birthday treat (ahem), I was treated to a wonderful day out by my better half in what is one of Ischia's less-heralded thermal parks. However, I think it deserves a bit more consideration because it really is a wonderful place to just completely switch off and watch the world go by with some of the best views on the island. Smaller than the likes of Poseidon, Negombo or Castiglione, Tropical has around 8 thermal water pools but it's not always about size (as the saying goes), and for a day out at a cheaper price with a smaller amount of fellow bathers I think it's definitely worth having a think about.

I almost forgot to mention the weather! It's been mostly fantastic but we have had a couple of windy days over the last week or so. That appears to be leaving us now though with lots more sunshine predicted for the forseeable future and temperatures up around 30° Celcius (84° Fahrenheit) for the week to come.

For today's photo I have chosen a seagull perched on a wall of Castello Aragonese in Ischia Ponte. Since posting the photo on our facebook page a few hours ago, speculation has grown that this could be the very same seagull that has appeared in many similar photos recently. This I cannot confirm or deny but for future reference I will call this one Gaetano, (seagull in Italian is "gabbiano" so the name is a cunning fusion of popular local name mixed in with the same first letter, smart eh? Ok, no not really) and if "he" (making a big assumption here but I didn't have the time and wouldn't know how to verify this) should appear in any other photos taken in the same place, then at least we know who we're talking about.

Ok that's enough nonsense from me for this week. For any serious enquiries about Ischia, feel free to drop us a line and I promise you will get a full and nonsense-free reply. I'm now off to "celebrate" another year on this old planet of ours.

Today in history: The first successful air balloon crossing of the Atlantic by three brave Americans (1978)