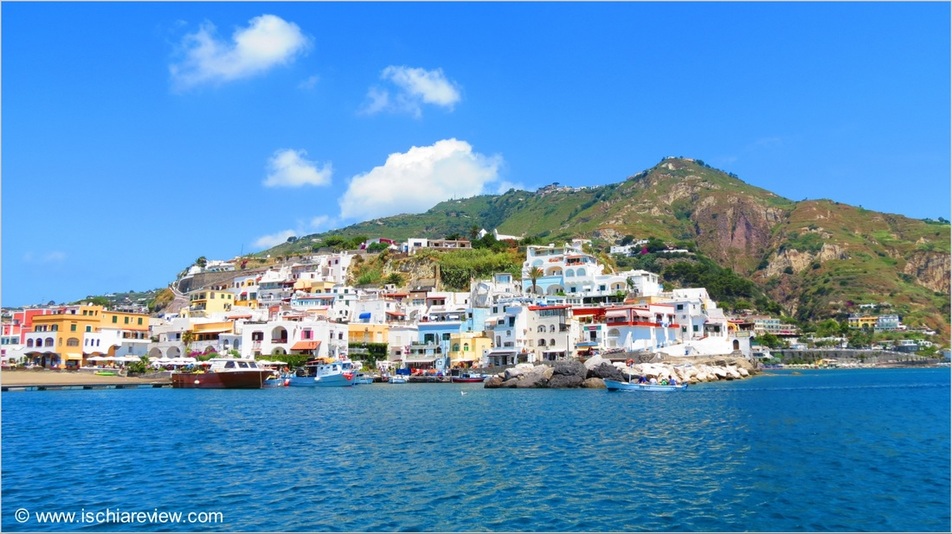 Welcome to our weekly Ischia blog, Ischia on Sunday. Here you can see the entry for Sunday 27th July 2014.
Good Morning Ischia!

I have to start this week's blog with the terrible news that the famous Castello Aragonese in Ischia Ponte was last night in flames. The castle which has stood on the rock in front of the village in one form or another since 474BC was set ablaze at around 12:30 last night. Luckily, this was all a dastardly scheme to trick us all from the organisers of the Festa di Sant'Anna with their clever display of pyrotechnics illuminating the sky for the thousands of Saturday night revellers who crowded the area to catch a glimpse of the annual event.

The Festa di Sant'Anna takes place every 26th of July and provides a unique spectacle, not only for the special effects used on the castle and the accompanying fireworks, but also by the huge flotilla of boats, large and small, that gather around the rock to join in the celebrations. Last night we chose Cartaromana as our vantage point and despite this meaning we missed the parade of floats, it gave us a magnificent view of the harbour. You could have been forgiven for thinking it was Christmas with the amount of bright lights of different colours provided by the yachts and small dinghies as they jostled for the best position in the harbour.

So just to confirm to anybody that I may have unduly worried, the castle is absolutely fine and stands proud in its same position this morning, albeit with a few dead fireworks scattered around its shores here and there.....

As for today, well from where I'm sat right now things are nice and peaceful, there's a wispy cloud hovering over Mount Epomeo just to my left, a regular occurrence in the mornings as the millions of years old mountain wakes from its daily slumber. The sea is nice and calm too and the feeling of tranquility is nicely finished off by the twitter of dozens of little birds as they take the unusual decision to hang out on some telegraph wires. Better that they're up there at least rather than on the ground where a dozen or so prowling cats lay in wait for prey whilst lazily stretching in the morning sun.

Things down in the towns aren't quite as peaceful as they are up here on the mountain slopes, the island is filling up quickly and you can sense the extra buzz and urgency as you make your way around the central hubs of the island in Ischia Porto and Forio. With August just a few days away that means that the busiest time of the year is almost upon us. This is the month when most Italians take their holidays, peaking around the 15th of August, a time known as Ferragosto. This is when many businesses and shops close to give their workers a holiday and Ischia has always been one of the favourite destinations for Italians all over the country who seek the island's beaches, night life and restaurants.

Weather-wise we've had a bit of a strange week with quite a bit of rain, perhaps making up a bit for the month long dry spell that we had around May/June time. However, looking ahead to next week the outlook is as you would expect it to be at this time of year, temperatures hovering around 30° Celcius (86° Fahrenheit) during the hottest parts of the day.

Those temperatures coupled with the mystical workings of nature mean that as you walk around in the evenings you will be struck by two things in particular. Firstly, the unmistakable sounds of crickets (the animal variety rather than the sport - I'm not sure which was named after which but would be interested to know if there's any connection) as they chatter away. For me, their sound is the most distinctive sign of hot summer evenings, but having spent so much time in Ischia, I have to now add another sensory charm to that summer link. We have one in our own garden and there are other larger specimens all over the island of the incredible "Night-Blooming Jasmine". It's a shrub which flowers only at night (as the name fails to conceal) and gives off a powerful yet beautifully fragrant aroma. At other times of the year the sweet scents of the wisteria and jasmine fill the air but neither have the same impact as the night blooming jasmine which they say can be sensed even half a kilometre away from the plant itself.

Today's photo comes from Sant'Angelo (as it so often does), I just couldn't resist the charm of the multi-coloured houses in the harbour, vertically flanked by the fresh blue sea and verdant mountain backdrops. Actually I would have loved to have been able to post the "money-shot" of the faux-burning castle from last night but my camera just wouldn't do it justice (workman, tools, bad, blaming - re-arrange in any order you feel appropriate) but I think Sant'Angelo makes a more than capable replacement.

Anyway that's enough of my tea, coffee and sfogliatella-induced ramblings for this week. I shall now move on to replying to my little backlog of e-mails before repairing to the beach for a weekly swim and rest. Don't stop your messages or phone calls however, we're very happy to help and promise to answer every single request as best we can, even if we can't!
​
A presto

Today in history: The London 2012 Olympics announced as open by Queen Elizabeth II (2012)