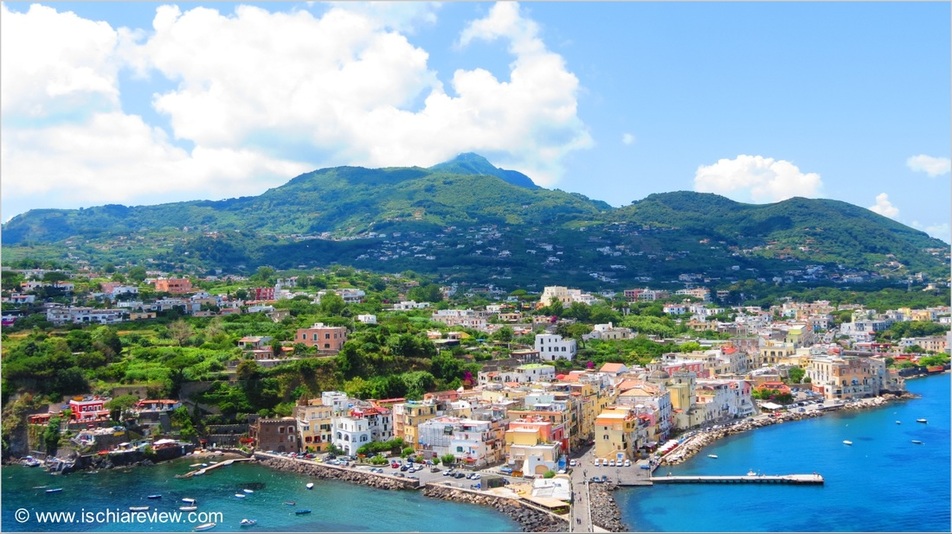 Welcome to our weekly Ischia blog, Ischia on Sunday. Here you can see the entry for Sunday 3rd August 2014.
Good Evening Ischia!

Apologies to all for the lateness of this week's blog, as I write it's around 11:30pm on a sticky, balmy evening in Forio and I dare say way past some people's bed times. However, I couldn't let the night pass without airing some of my random thoughts about all things Ischia.

Although it's dark right now, it's been an illuminating day in many ways, punctuated by an afternoon disco, wrestling with water-bound inflatable objects and one of the most stunning sunsets you could ever imagine at the end of it all.

A day of full of mirth and surprises came thanks largely to the O Vagnitiello Thermal Park in Casamicciola which was where I spent the afternoon. Having been there once last year to take some photos for the website, I thought I knew what to expect, i.e. a nice thermal water park with jacuzzis, saunas and small pools of warm thermal water whilst enjoying a very pleasant view of Procida, Naples and Vesuvius lurking in the background. I hadn't reckoned on the amount of fun that could be had from a collection of yellow inflatable objects that were neatly arranged for guests of the park in the sparklingly clean water of its bay. There were a collection of large round tyres, rectangular mats and floating sunbeds all connected and held in place by a series of ropes. I just about managed to clamber on to the rectangular mat without too much of a problem and with a little help from friends was semi-gracefully pulled on to the tyre as well. I was however, badly defeated by the floating sunbed which I tried about half a dozen ways to sit on but failed each time,  on one of those occasions taking a crack on the head from said floating sunbed to add some mild injury to the embarrassment.

The most amusing part of the day was yet to follow though, after an incredibly large "Zingara" (a type of sandwich that is typical to Ischia. Toasted and full of ham, mozzarella, lettuce and tomatoes. If you're here for any length of time you have to try one as they're delicious!), for lunch, we were entertained to some live music in the central area of the park. It all started off very sedately with a crooner bashing out some of the typical Italian classics such as "Torna a Surriento" and "O Sole Mio", but got gradually more animated with a rendition of Renato Carosone's "Tu vuò fa L'Americano" which got some of the park's guests up on their feet for an impromptu boogie. The party atmosphere increased at an impressive pace as some more modern tunes were mixed in and at one point the whole middle section of the park were throwing shapes on the dance-floor (previously a walk way between two swimming pools) with all kinds of impressive, acrobatic manouevres being performed by young and old alike. It wasn't what I was expecting at all but I wouldn't have changed a thing about it as it was full of life and fun. Later in the afternoon as I decided to resume hostilities with the floating armchair, I walked past another area where a group of middle-aged men started singing a collection of folk songs in the middle of their swimming pool and the whole thing just seemed to work, bizarre as it may sound. I lost my rematch with the floating sunbed by the way....

So on the whole I enjoyed my day out at O Vagnitiello, whilst it might not come up as number one on many people's lists of thermal parks in Ischia, it certainly seems to me to be the most fun out of all of them so anybody who's looking for a bit of an afternoon party on a summer weekend should look no further.

On the weather front, things have been a bit weird over the last few days, we've had the odd chilly evening, a huge burst of rain one morning and some strong winds at other times which are not what you would usually associate with August in Ischia. Looking ahead to the next week it looks like things should be a bit more predictable with lots of high temperatures, in excess of 30° Celcius (87° Fahrenheit) during the afternoons and still hot even late at night where it shouldn't drop below 24°C (75°F).  The sunset this evening was really something to behold though, the brightest scarlet orb you can imagine, hovering over the horizon before suddenly disappearing from view should signal the beginning of the hottest part of the year.

Looking ahead to next week there is an event on Thursday that I'd like to mention. Actually it was pointed out to me by a friend of Ischia Review's, John from Kent in the U.K., who had heard about Andrea Bocelli performing in Ischia on the 7th August. John was interested in getting hold of some tickets for the event as he's a fan of the legendary singer so I had a look into some of the details of the concert as it wasn't 100% clear from the event's website exactly what the programme will be. Having been down to the ticket office in Ischia Porto today I now have some more details about the event. It's actually a classical music concert that Andrea Bocelli will be attending in order to receive an award (the Ugo Calise award), but there is no guarantee that he will actually be singing. He is taking some musicians with him which insinuates that he will perform at some stage but like I say, that can't be guaranteed. There are three sopranos that will be singing as well as a famous Neapolitan comedian called Gino Riviecco who will be presenting in the garden of Michelangelo's Tower in Ischia Ponte. Tickets are priced at €20 per person but can only be purchased from the ticket office in Ischia Porto. For anybody who would like more information about this please let me know.

One thing that I have to mention that happened last week was that we changed our logo! There are various versions of the new logo but the main one that we'll be using from now on can be seen at the top of every page. We decided to smarten the logo up a bit and also use it to explain exactly what the site is with the words "The English Guide to Ischia" added to the bottom and we've also kept the outline of Castello Aragonese which to many people is the symbol of Ischia. We have various other versions of the same logo, most notably the red, white and green version that features all of the colours of the Italian flag which will be used on any official printed material. We also have a predominantly black and a predominantly red version which we'll be using for special occasions so keep an eye out for those.

Today's photo is a real beauty, it was taken from Castello Aragonese and really shows the vivid colours of the town of Ischia Ponte with the bright blue water at its shores and the pastel coloured houses that give it so  much charm. I hope you like it as much as I do!

Ok that's all from me for this week, we've been getting a lot of e-mails over the last few days which is great so please keep us in mind if there's anything you think we can help with, it's always a pleasure for us to be able to assist and we'll get back to you as soon as we possibly can.

Today in history: Closing ceremony of the 22nd Olympic Games in Moscow (1980)