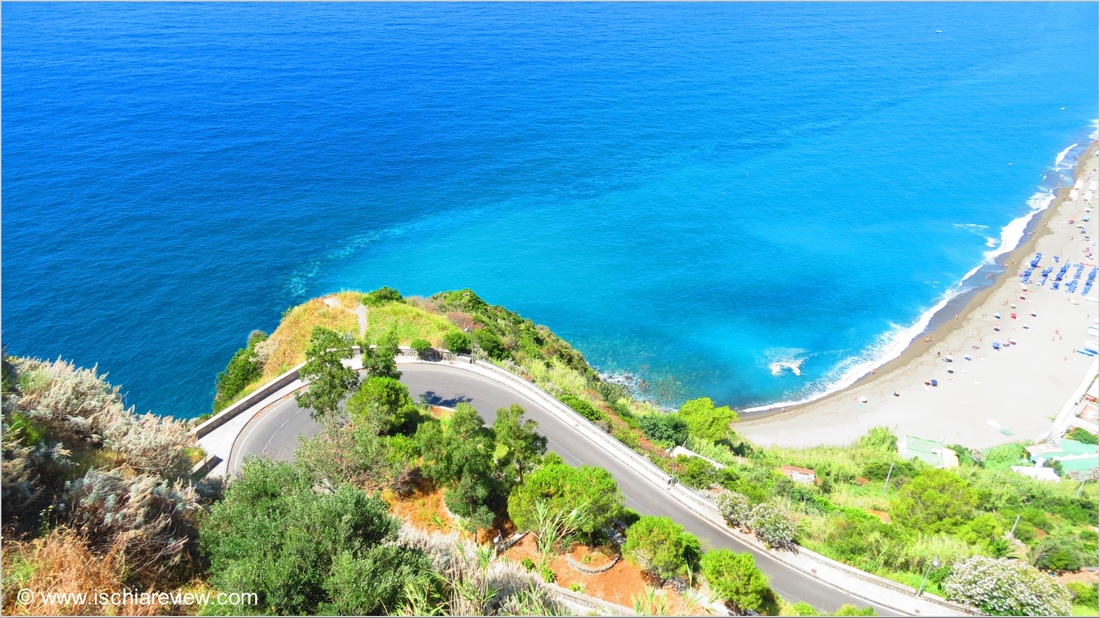 Welcome to our weekly Ischia blog, Ischia on Sunday. Here you can see the entry for Sunday 6th July 2014
Good Afternoon Ischia!

This week's Ischia on Sunday returns to its traditional spot, i.e. Sunday, and what a gorgeous day it is too! Looking outside, the scene is dominated by different shades of blue provided by the ever-changing sea and the sky with its wispy white clouds merrily being carried along on their ocean cruise by the lightest of breezes.

In the foreground, the garden is awash with green, interspersed by the odd speck of purple, red & yellow provided by the blooming flowers and if you squint your eyes you'd see a beautiful original canvas by Monet.

Elsewhere in the garden the giant sunflowers dominate the scene. On the largest of them the huge heads are beginning to wilt under their weight and one in particular resembles a nightclub bouncer towering over a group of under-age queuers who are just about to be refused entry which in reality are a collection of roses desperately seeking a piece of their own sunshine in competition with their sky-scraping neighbours.

It's getting to the stage of the year when it almost becomes pointless talking about the weather, as you would expect it's getting very hot. Prospects of rain are very slim for the foreseeable future and temperatures are hovering between a maximum of 30° Celsius (86° Fahrenheit) at the hottest parts of the day and down to a slightly sticky 20°C (68°F) at bed-time.  Anybody who is a fan of the UK TV series "The Fast Show" would understand what I mean when I say "Scorchio!" as the weather girl throws away all of her rain icon magnets, that's the stage we're at right now.

Looking back at last week I should mention that the Ischia Film Festival has now finished for this year. It was a brilliantly-organised event with the five intimate locations within Castello Aragonese where you were able to watch a variety of original and interesting films, documentaries and short films, many times with the Director there to give you a preview before you sat down to watch. With the magnificent backdrop of the castle with its evening glow it made for a truly memorable setting.

However, film fans need not lament as hot on the heels of the Ischia Film Festival comes the island's second annual film festival, The Ischia Global Film and Music Fest which starts on Saturday 12th of July and lasts until Sunday the 20th. Ischia Global is always keenly anticipated as it usually comes with a plethora of Hollywood stars who make their way to Ischia for a week of promoting their films laced with a heavy amount of partying at any number of celebrity bashes that take place all across the island. Any invites would be keenly accepted by the way :-) Last year's event brought the likes of Nicolas Cage and Samuel L Jackson to the island and this year there are more big names rumoured such as Kevin Costner and Sylvester Stallone (although I must add the caveat here that these are just rumours at this stage as far as I'm aware!). Anyway, I'm sure there'll be lots more said about Ischia Global in the coming days and weeks so keep an eye on our facebook page for updates as they happen.

Staying on the theme of events but on a slightly smaller scale, I'd like to give our friends at the Pietratorcia Vineyard a mention. Starting on Friday the 11th of July and continuing every Friday throughout July and into the beginning of August, they will be holding evenings of live music at their fantastic restaurant which sits in the grounds of the vineyard itself. The evenings consist of the the chance to try some of their excellent wines as well as their traditional Ischian cuisine while sitting under the grape-filled pergola in the courtyard. The music on offer differs for each evening but with a selection including modern jazz, traditional Neapolitan folk music, soul and much more. For anybody interested in purchasing tickets for the event, please contact us and we'll give you all of the prices and details.

Today's photo comes from the road down to Maronti Beach in Barano. Anybody who has been there will know the little car park when you can stop and see the magnificent view from above, and from that same place you can see the road that twists and turns as it descends towards the beach. I chose this particular photo because the colours of the sea were particularly lucid when I passed by there earlier in the week, really showing how clean the water is down there.

Ok that's pretty much it from me for this week, so whether you're reading this from sunny Herefordshire (you know who you are!) or an even sunnier St. Croix in the American Virgin Islands (you know who you are too!), I wish you a very happy week and I'll be back with more next Sunday. I must also say a big congratulations to Bryce and Reneè who we had the pleasure of meeting last week and have a special announcement to make when they get back to Sydney, Australia in the next few days. Well done guys and we hope to see you back here again soon!

Oh I suppose I should also give some kind of mention to three of our cats who are "celebrating" their birthdays today by lying in the grass, hunting lizards, licking themselves and generally doing other cat stuff. I know it's their birthday as three of them arrived on our doorstep last year on the day of the Wimbledon Men's Tennis final between Andy Murray and Novak Djokovic with one being called Novak and another one Wimbledon. The third one got called Andy but we had to change it as we later realised it was a girl. Anyway, happy birthday to them, even if they have no idea what a birthday is!