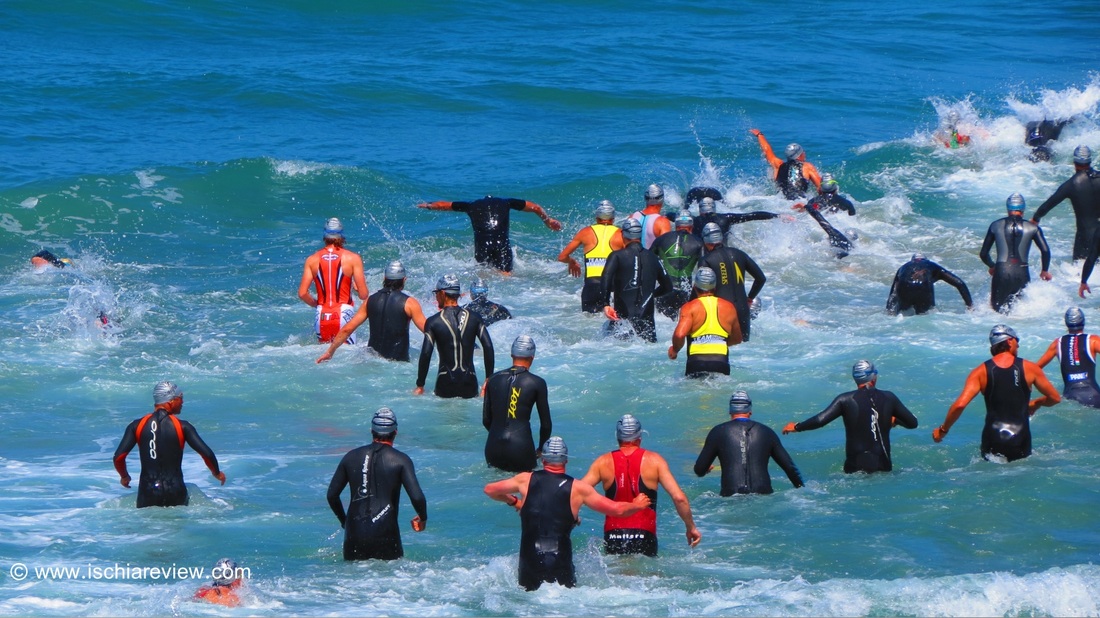 It's early morning here in Forio on the western coast of Ischia at that wonderful time of day where darkness gradually turns to light and the world reawakens from its nocturnal slumber. The birds always seem to be the first to go about their business, a morning meeting of some cheerful red robins seems to be in full swing as they busily discuss their plans for the day's activities. We've still got a few clouds around but they look like the type that will disappear fairly quickly as soon as the sun arrives after performing its duties in the east.

Temperatures today should see a maximum of around 16° Celcius (61° fahrenheit) but this evening should be quite a bit cooler, dropping as low as 8°C (47°F) in the mountainous areas of the island. There's hardly a breath of wind and the sea is nice and calm and we should have similar conditions for the next two or three days.

Today's photo is of those brave souls who compete in the annual Ischia Sunset Triathlon. The event takes place every May and sees contestants complete the three traditional triathlon disciplines of swimming, cycling and running. The starting point for last year's event was Chiaia Beach in Forio where the race got under way with the 750 metre swim towards Chiesa del Soccorso. As you can see from the photo it was quite a windy day and the contestants had to battle with some fairly big waves as they struggled to establish their rhythm. After the swim comes a 20km bike race which sees the competitors race for 4 laps around a specially prepared 5km route through Forio town centre. The final discipline sees a 5km run back to the start/finish line at Chiaia where the exhausted athletes gleefully put an end to their exertions accompanied by the support of the large crowds that gather to cheer their friends and loved ones home.

Dates for this year's event have yet to be announced but it is expected to be some time in May. As soon as the details are announced we'll put the details into our Ischia Events Calendar which is updated every day to show the most important events on the island. You can find dates of all the religious festivals that happen every year in Ischia including the busy Easter period with Actus Tragicus and the Corsa dell'Angelo as well as other important festivals such as Sant'Anna, San Michele and Santa Restituta to name just a few. You can also plan your visit around the two annual film festivals, Ischia Global Film & Music Fest and the Ischia Film Festival or time your visit to include other major events such as the Ipomea Festival at Negombo Thermal Gardens. We'll be adding more events to the calendar as they're announced so remember to bookmark the page to keep up to date with everything.

Ok that's all from me this morning, remember we're here to help with any questions you have about Ischia so feel free to drop us a line and say hello at any time. Apart from that, have a great weekend!