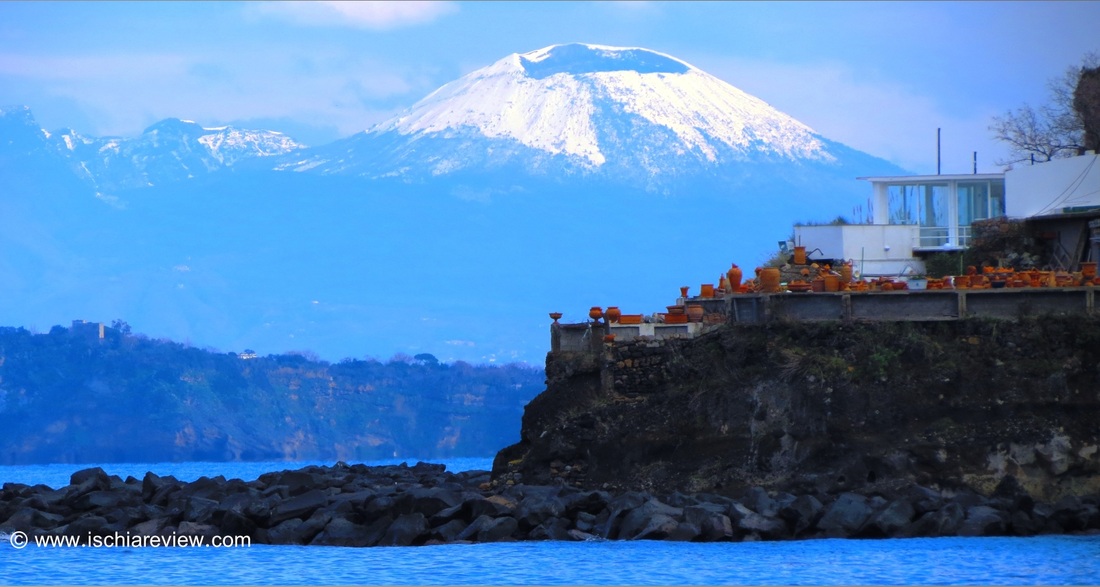 The words I'm about to write might never be repeated in the daily blog so mark this day down in your calendars. This morning we wake to the extraordinary sight of SNOW on the ground!! I am in no way, shape or form an expert on meteorology but I was quite sure that the temperature needed to be somewhere at least approaching freezing for that to happen. The outside temperature right now is 10° celcius (50° fahrenheit) and the snow is melting fast so I can only think there was some freakish dump of the white stuff during the early hours while we were all safely tucked up in bed.

To say we've been having some strange weather over the last week is putting it mildly with electrical storms, wind, sun and rain all featuring but today's snow tops the lot!

To celebrate our little windfall, today's photo is of the snow-peaked Mount Vesuvius, seen from Casamicciola on Ischia's northern coast. The huge volcano is best known for the tragic events of 79AD when its eruption and subsequent flow of lava destroyed the nearby city of Pompeii, killing an estimated 16,000 people. There have been many minor eruptions since then but nothing on the scale of the one that wiped both Pompeii and nearby Herculaneum off the face of the planet.

These days the volcano is a popular tourist destination and there are walking tours that take you right up to the top of the crater where you can see the fascinating size and form of the hole at its centre. Vesuvius is just over five miles (nine kilometres) away from Naples on the mainland and its presence looms large over the city.

Many of the visitors to Mount Vesuvius combine their outing with a visit to the ruins of Pompeii or Herculaneum. The more famous of the two is undoubtedly Pompeii, a UNESCO World Heritage Site, and a place that has attracted curious visitors for over 250 years since it was re-discovered by a Spanish engineer. One of the most intriguing sights at Pompeii is of the seemingly petrified figures of the poor people who were caught in the eruption and died in the exact positions that they can be found in now. In fact the figures such as those in the "Garden of Fugitives" are plaster-casts that were made by pouring plaster into the spaces under the lava where the bodies had been laying for so many years before being found.

The day trip from Ischia to Mount Vesuvius and Pompeii is one of our most popular excursions and certainly an interesting way to spend a day if you're keen on exploring the surrounding area. The trip includes the ferry crossing to Naples followed by a coach-trip to Pompeii where you have a two hour guided tour. That's followed by lunch at a local restaurant before moving on to Mount Vesuvius to explore the trails around the crater's edge.

The Vesuvius & Pompeii excursion is just one of many different day-trips you can enjoy from Ischia and there are also some other fascinating and beautiful places to see in the region of Campania on the mainland such as Caserta & Montecassino, the Amalfi coast line including Sorrento, Positano, Ravello and Amalfi itself, and some of Europe's most scenic islands such as Capri, Procida, Ponza and Ventotene all close by and easily reachable for a day out.

For more information and details about Mount Vesuvius, Pompeii and any of our other excursions please drop us a line and we'll be glad to help out.

Ok that's all for today, this incredible morning when we woke up with snow on the ground in Ischia, how long I wonder will it be until we see those words again. Have a great Sunday wherever you are and we'll be back tomorrow with more from this island that never ceases to amaze!

Today in history: The River Thames in London freezes (1434)