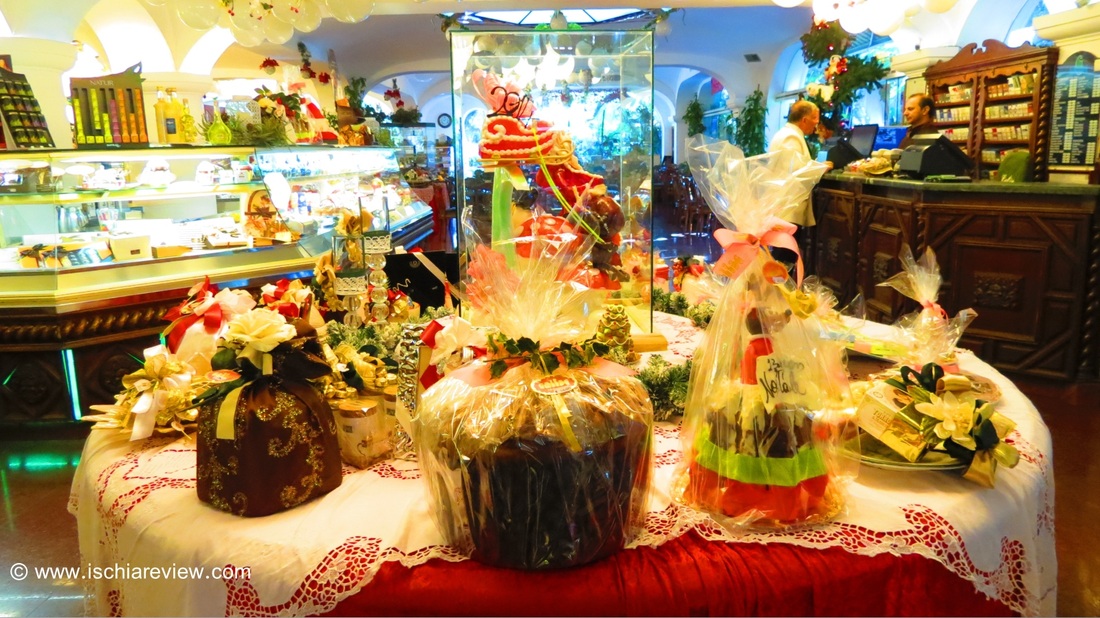 It's a cloudy start to the day here in Forio as we get closer and closer to the big day. Although it's not raining there's a slight dampness in the air and it feels a bit colder than yesterday without the sunshine. There's hardly a breath of wind and the sea remains calm, the only disturbance to the tranquil scene is an amusing stand-off between a neighbouring cat and dog. Sat calmly perched on a wall the cat is staring disdainfully at the pooch as it runs around the garden wildly roaring its disapproval, definitely one whose bark is worse than its bite!

Once again the forecasters have got it wrong by predicting sunshine and as far as temperatures go they're telling us a minimum of 13° Celcius (55° fahrenheit) and a maximum of 16°C (60°F), but I think you can probably knock a few degrees off those figures given the cloudy skies.

Today's photo is from the famous Bar Calise in Ischia Porto and shows some of their wonderful Christmas cakes and confectionery on display. Most prominent are a couple of very large Panettone wrapped in ribbons and cellophane. Panettone is one of the mainstays of Italian Christmas tradition and is often used as a gift, especially if visitng some friends or relatives for dinner. The delicious cake is sweet and has a bread-like quality and comes in a variety of flavours. The most common ingredients are raisins (uva passa) and glazed-fruit (canditi) but you can also find versions with lashings of chocolate cream or gianduja which is another type of chocolate made with hazelnuts. Another favourite is the Pandoro which comes without the dried fruit and has a different shape, an eight-sided cone, compared to the dome-shaped Panettone. The Pandoro which is covered in sugar is equally as delicious and equally as addictive and I've already had far too much of both for this festive period!

Walking around in Ischia Porto yesterday I saw that the Christmas markets are now in full swing in Piazzetta San Girolamo next to the skating-rink and there are similar stalls cropping up around the other major towns on the island such as Forio and Casamicciola. If you're looking for some gift ideas these could be a great place to visit as they often sell hand-made arts and crafts which you might not find anywhere else.

Ok that's all from me today, I should probably start thinking about doing some Christmas shopping myself come to think of it as I haven't done any yet! I'll be back with some more tomorrow morning.