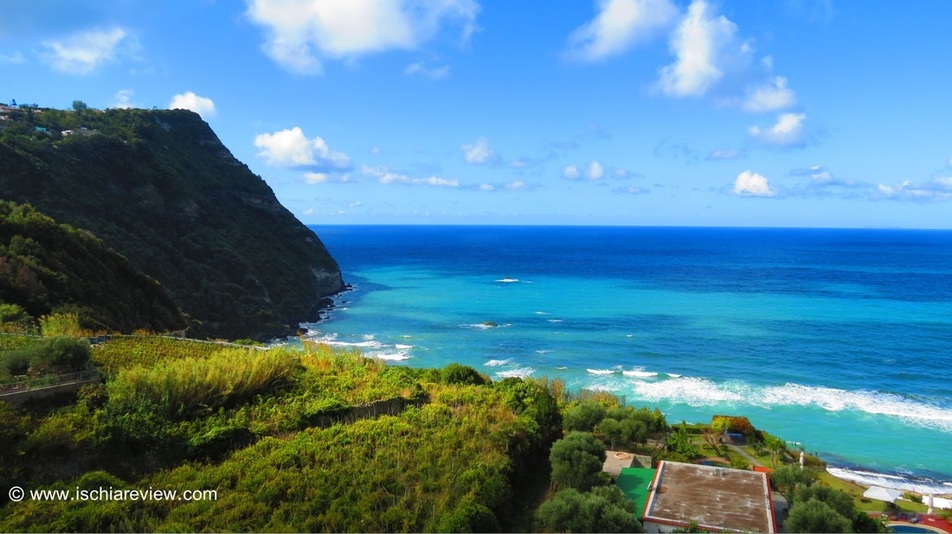 Welcome to our weekly Ischia blog, Ischia on Sunday. Here you can see the entry for Sunday 10th August 2014.
Good Evening Ischia!

It's a truly magical evening here in Ischia on one of the most important dates of the calendar. August the 10th is known as San Lorenzo (Saint Laurence) in Italy and annually marks the beginning of a three day period when you can see the wondrous sight of shooting stars in the sky.

As a martyr who was burned to death on a grill, the shooting stars are said to be the tears of San Lorenzo but there is also the scientific reason for this phenomenon, the Perseids meteor shower.

Despite being a very clear evening however, we have not yet been treated to the height of the spectacle when the sky is filled with thousands of stars (somebody may well correct me on this number if I have exaggerated!), but over the next few days we will certainly see the twinkling jewels as they dance around the night sky in a dazzling display of natural pyrotechnics.

This incredible meteorological event will be ably assisted by one of its partners, the weather, which as you'll be able to see from the graphic at the bottom of the blog is predicted to be nothing but sunshine for the forseeable future. The maximum temperatures are up around 32° Celcius (89° Fahrenheit) during the afternoons and even as high as 25°C (76°F) in the evenings so for many people it will be a case of reaching for the air-conditioning  remote control (if you're lucky enough to have such a thing - just for the record, I'm not).

Looking back over the last week it's been as busy as ever but also lots of fun. I'd like to give mention to two events that I enjoyed greatly, both with a couple of common themes, notably, music and wine! The first of these events was my first visit to one of the Pietratorica Vineyard's music and wine evenings at their vineyard in Panza. Apart from a requirement for some mild revelry on the evening in question, I was also lured by the attraction of that fantastic musical sound known as "La Tamorra". There are many regional strains of this kind of folk music but it mostly involves flutes, guitars and tambourines, accompanied by an often doleful yet passionate voice. The food and wine on offer at Pietratorcia was first class as you would expect but the evening was really topped off perfectly by the sound of La Tamorra which always comes in partnership with some brilliant dance moves performed by all age groups.

The band who performed that evening at Pietratorcia are known as "Pietrarsa di Mimmo Maglionico" and you can see a youtube clip of their work by clicking here. The link really doesn't do them justice but I urge you all to lend your ears for a couple of minutes to this amazing sound and imagine how much of a thrill it is to hear it performed live. At the end of the Pietratorcia performance I managed to make out in my ever-improving comprehension of Italian that they would be performing the very next evening as well which was fantastic news.

Fontana is one of the smallest and sleepiest of Ischia's "frazione" or little villages and apart from being the starting point for walks up to the top of Mount Epomeo, there's never much particularly going on there. However, that all changed on Wednesday night when the annual "Sagra del Vino e  Saucicciata" took place in the main square which is the home of the fairly imposing statue of Jesus Christ that was firmly backstage while the event was taking place. The sagras are a kind of village fete or fair and this particular one was in reverence to the mighty sausages and wine produced in the village. With barrels and barrels of free wine on offer and the night air filled with the smoky aroma of sizzling sausages, it was once again the time for Pietrarsa di Mimmo Maglionico to take stage, a larger stage than for the previous evening and with quite a sizeable crowd in tow. Again, the rhythmic sound of the Tamorra with its passionate vocals got pretty much everybody performing some kind of dance move, some more proficient than others (I was in the "other" camp) and the whole evening really was a thrill.

So I'll definitely be looking for some more nights out at the sagras but I will keep a particular eye out for the intoxicating sound of the Tamorra. In fact there was a similar event last year in Forio towards the end of summer so fingers crossed they keep that going again this year.

Looking ahead to next week, I feel it's important to mention that Friday will be "Ferragosto". The 15th of August is a national holiday in Ischia which means the island will be considerably busier for the next couple of weeks than it is for the rest of the year. This is worth bearing in mind for anybody who is interested in hiring a car, a scooter or a boat as availability for each is very thin on the ground at the moment. By all means ask for anything you need and I will be happy to check for you but be prepared that you might not be able to find the exact thing you require for your precise dates but I will give you appropriate alternatives where possible.

For this week's blog photo I've chosen a nice and colourful shot of the bay of Citara in Forio. I was there this very afternoon and despite it being quite busy as I'm sure you'd understand on a Sunday in August, the water was particularly clean, clear and warm, making for a welcome refreshment from the searing afternoon heat. Swimming in the sea at sunset was also another memorable moment on another magical day in Ischia......

That's all from me for this week, just drop me a line if you need anything and I'll be very happy to be of service.

Today in history: The American "Magellan" spacecraft lands on Venus (1990)