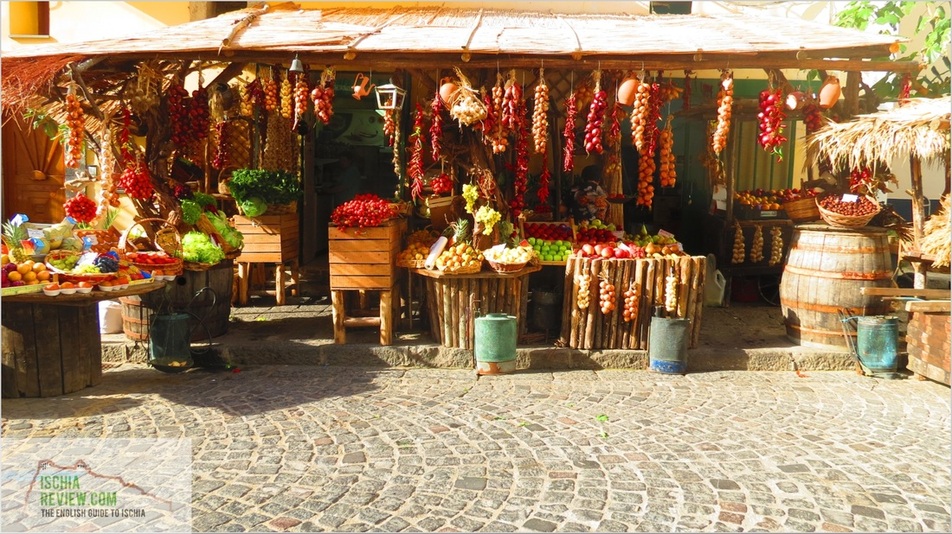 Welcome to our weekly Ischia blog, Ischia on Sunday. Here you can see the entry for Sunday 12th October 2014
Good Evening Ischia!

The weekend is drawing to a close but there's still just about enough time to give you my weekly report on the goings on in/on Ischia.

It's been a much quieter week than we've been used to of late with the main tourist season well and truly drawing to a close. The first hotels closed for the winter last weekend and today a lot more followed suit. By the end of next week the island really will seem a different place with fewer people around but autumn is not without its charms.

The weather is still fantastic and the forecasts tell us that it should remain so for a good while yet. Today for example saw a high of 26° Celcius (79° Fahrenheit) but those figures are on the rise for the early part of next week with 28°C (83°F) predicted for Monday and Tuesday. The evenings are still nice and warm too and you can happily sit outside in a restaurant well into the night without feeling a chill.

The general atmosphere on the island at the moment is one of relaxation. Most people do jobs that are in some way or another related to the tourism industry so it's only natural that as things start to die down a bit, there's a natural tendency to take one's foot off the gas a bit, so to speak. The weather, the reduced amount of work and the promise of holidays to come, all combine to create a happy population and that can be palpably felt as you wander around the towns and villages all across Ischia.

So with things reasonably under control on the Ischia Review front, we afforded ourselves the luxury of a day of relaxation at one of Ischia's premier thermal parks. In fact, Negombo Thermal Gardens where we decided to spend the day, has an enormous number of fans both that live on the island and from abroad. It competes very closely with Poseidon Thermal Gardens in terms of being the absolute favourite so having been to the former on many occasions, we thought we'd give Negombo a whirl today to see what sets it apart.

There are so many similarities between Negombo and Poseidon that to make a judgement on which one is better seems a bit trivial. They both sit in natural beauty spots, next to a beach, have a large number of naturally heated thermal water pools and offer a wide range of wellness treatments. So without saying that one is better than the other, what I can say is that we had an absolutely fabulous day out at Negombo today. Starting out by exploring the elevated section of the park with its fantastic views over the bay of San Montano, we switched between the pools of different temperatures. In this area you'll find the huge showers, plinth-like structures (a bit like the one that appeared out of nowhere to confuse the monkeys in "2001 A Space Odyssey" - a scene that I never quite understood the point of and which used up 20 minutes of my life that I'll never get back!) that gush with 30°C (86°F) thermal water and just along from there is a darkened cave with a selection of saunas and pools of varying temperatures.

One of the highlights was the Japanese pool where you walk on pebbles, waist high in water of alternating temperatures, one being hot the other being cold. Repeating this process three times is said to be very good for your circulation and I must say my legs felt fantastic afterwards and that initial cold shock after the warm water channel was worth it.

The highlight of the day without a shadow of a doubt was the "romantic massage" we were able to enjoy in the wellness centre. Being an apprehensive kind of chap, I was a bit apprehensive and curious about how a massage with two other people in the same room, i.e. the masseurs, could be considered romantic but believe me it worked. With the soft music and darkened room with little twinkly lights followed by the expert work of the masseurs, it's possibly the most relaxing "activity" I've ever done. In fact I've felt so relaxed after what was my second ever massage that it's taken me until nearly midnight to write the blog! It's only thanks to a large amount of caffeine, delivered in the form of a delicious home-made Tiramisù ("lift me up" by the way in English), that I've been able to rouse myself to any kind of effort this evening.

The other highlight of the day at Negombo was the delicious meal at the Trattoria Casa Colonica which is one of the two on-site restaurants. Now to some ears the name of the restaurant might seem a bit odd, a bit too close to the word "colonic" which is usually followed by the word "irrigation", a rather unpleasant subject and not one you want to consider whilst dining. However, a "Casa Colonica" is something like a peasant's house from days gone by and the restaurant is decorated in a really unique way with lots of wooden furniture and random features such as lights made out of wooden crates and coloured tables & chairs. The food was great as well and I can now personally recommend the squid, the mussels and the parmigiana, all nicely presented in a very laid-back atmosphere.

Now having spoken mainly about Negombo I've decided to post a photo of something completely unrelated, (I'm a difficult person to understand so I'm told). The reason I chose today's photo was because I just love the autumnal colours provided by this beautiful shop. I stumbled upon it the other day for the first time, it's slightly off the beaten track in Ischia Ponte but if you do a right just before the Sea Museum you'll feel like you've stepped back in time when you find this incredibly well-stocked grocery store with its delicious produce on display for all to see.

Ok so that's about it from me this week. From the chilled-out environs of Forio on the west coast of Ischia I bid you all a happy end to your weekend. We're always here ready to hear from any of you that are planning a trip to Ischia and we love being able to help with any advice we can give so drop us a line before you come and we'll do our best to make sure you have a great time here.

Today in history: The six billionth living human being is said to have been born (1999)