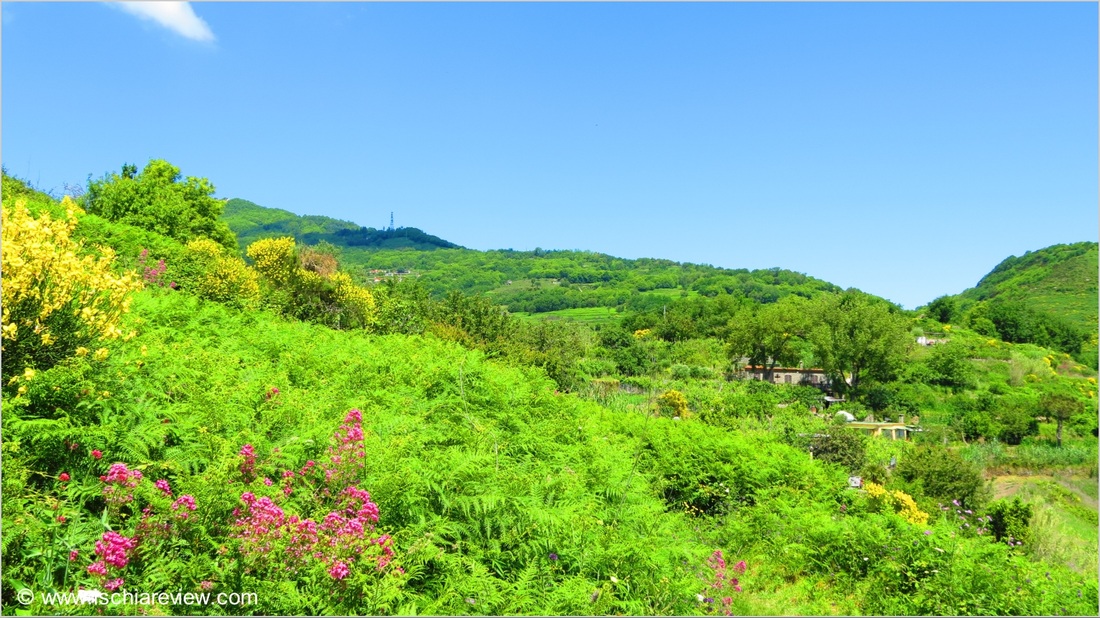 Welcome to our weekly Ischia blog, Ischia on Sunday. Here you can see the entry for Sunday 1st June 2014
Good Evening Ischia!

Once again the weekly blog comes right at the very end of what has been another extremely busy week (actually it's slightly crept into the beginning of next week), but better late than never as they say! It's been another beautiful spring day on the island with temperatures up around 25° Celsius (77° Fahrenheit). Anybody visiting Ischia this week will be very pleased to hear that the forecast for the next seven days is fantastic with maximum temperatures gradually on the increase and expected to reach 30°C (86°F) by Friday with no rain predicted for the foreseeable future (cue thunderstorms!).

The main reason for the tardiness of today's blog was the Festa della Ginestra which took place this morning and afternoon in Barano. The festival, named after the yellow gorse bush that grows freely in Ischia at this time of year, is an annual event that includes a hiking trek followed by a kind of mass outdoor picnic party in the forest. For some reason I missed last year's event so I was determined to see it this year in order to report back about how it unfolds and precisely what goes on. So this morning we started reasonably early (earlier than I would have liked if I'm honest!) and took the CS bus from Forio round to the little village of Buonopane in Barano.

Buonopane which literally means "good bread" is one of the quietest of Ischia's hamlets but today became the centre of attention for visitors from all over the world who arrived to take part in the festival. The village is famous for being the home on the island to a group of men who perform the traditional "'Ndrezzata" dance and this is in evidence as you walk through the narrow streets before arriving at a small square where there's a beautiful painted mural depicting the dancers in full flow and dressed in their traditional white outfits.

Although we were a little bit late for the scheduled 10:45 start, we gradually managed to catch up with the guide at the front of a group of around 200 people. This group then snaked its way up and around the narrow paths that lead up from the village towards the hill-top plains and forest of Buceto. The scenery when you reach the top of the mountain is breathtaking with wonderful views out to the islands around Ischia such as Capri, Procida and the small nature reservation of Vivara while the imposing Mount Vesuvius and the city of Naples lie not too far in the distance.

The atmosphere among the group was always very convivial and this communal sentiment was helped along even further by a brief stop at the Costa Delle Caranfe agriturismo which handed out complimentary glasses of wine, bread and salami, providing a very welcome boost for the rest of the path ahead. From this point the scenery was slightly different as the plains gave way to forest before arriving at the area known as San Paolo where the main festivities took place. As with any Italian event the main highlight came in the shape of the food with a 4 course picnic available for €15. The picnic consisted of bruschetta followed by pasta with beans and then barbecued meat and salad which I have to say was delicious, although the best was to come with the freshly made "zeppole" which are a traditional doughnut made in the region of Campania.

With lots of complimentary wine to go round there was no shortage of good-will and the merriment continued with the musicians playing traditional folk music on guitars while the crowd sang along to their old favourites. The highlight for me was the performance of the n'drezzata which I alluded to above, the dance performed by the men of Buonopane. Most of the men were in their "mature" years but you could see that those years had been spent with lots of careful practice at the art which involves dancing with wooden sticks that are struck to the man standing next to you in an intricately choreographed performance with no small risk of personal injury attached. Anyway, the dancing was a real joy to watch, as were the expressions on the faces of the dancers as they enthusiastically avoided knocking  seven bells out of each other!

The whole event lasted well into late afternoon/early evening and really was great fun. Part of that fun was provided by meeting a lovely family from Sydney, Australia. Anthony, Sally and Adam had been in touch by e-mail over the previous days and it was a real pleasure to bump into them and have a chat with them about their experiences in Ischia. A big hello to all three of you, I hope you enjoyed your day out and have a great time on the rest of your holiday, don't forget to stay in touch!

Another important event that you should know about takes place tomorrow in Forio. The Ischia Sunset Triathlon has become an annual event on the island and starts at 1130am tomorrow morning. There will be some disruption to traffic around Forio for the morning and early afternoon so please be aware of this if you're planning a day out. The triathlon itself is worth turning out for as you watch the poor souls complete a 750 metre swim from Chiaia Beach to Chiesa del Soccorso before jumping on to the bikes for a 20km ride. The final part of the event is a 5km run around Forio with the finish line next to the same beach where the race started. Make sure you give all the contestants lots of encouragement as they go round on what will be a very hot day and difficult conditions.

Ok that's all from me for this week, it's way way past my bed time but I'll be back with more next Sunday. Have a great week wherever you are and drop us a line when you can if there's anything you'd like to know about Ischia or if you need some advice.

Today in history: The driving test and licence plates introduced in England (1935)