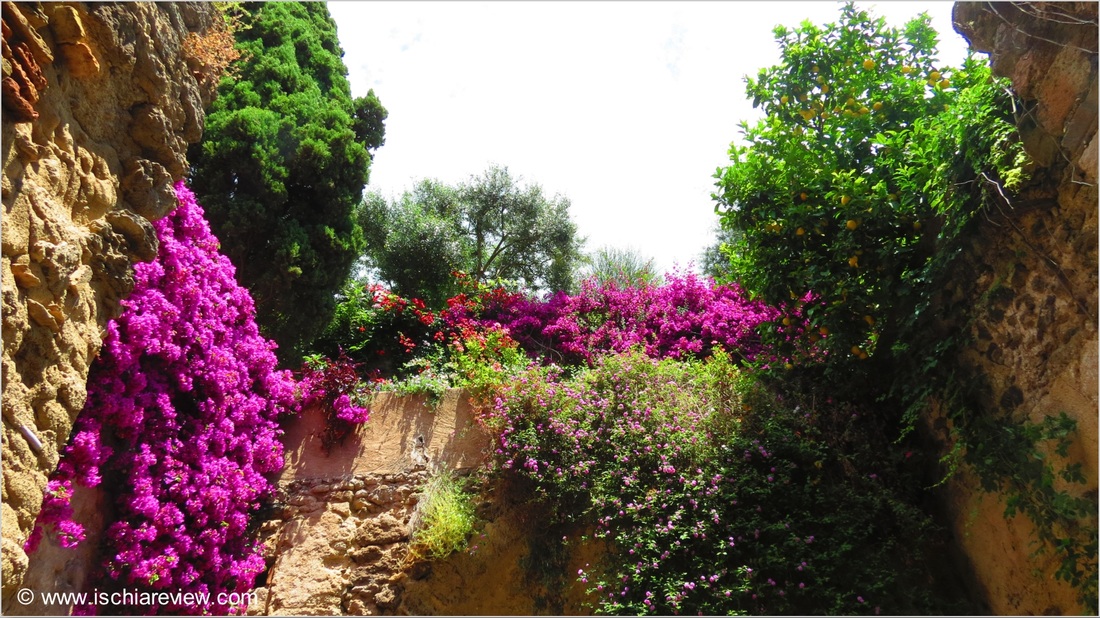 Welcome to our weekly Ischia blog, Ischia on Sunday. Here you can see the entry for Sunday 20th July 2014
Good Afternoon Ischia!

It's that time of the week again where I get to share some of my observations about this wonderful little island in the sun.  Right at this moment it's coming up to lunch time in Forio on the west coast (I dare say it's the same time on the other side of the island too!) where I sit, sandwiched between Mount Epomeo on one side and the bay of Citara on the other.  It's one of the hottest days of the year so far with temperatures set to top 31° Celcius (88° Fahrenheit), making for a slightly lethargic and sticky end to the week but hey, it's Sunday so who cares!

Actually although it's very hot and sunny, it's one of those kind of misty days where you can't see all of the surrounding islands in the distance such as Ventotene or Ponza, but also the kind of day where you could get badly caught out if you don't apply a good amount of sun-screen. In fact on one of the weather charts I was looking at there was a rather sinister looking red and yellow triangle thing with an exclamation mark in the middle next to the temperature chart so I think that means you need to beware if you're heading down to the beach!

Looking back over the past week, it's been a lot of fun and hard work at the same time with a few days a little bit out of the ordinary. The three weddings that we were involved with all seemed to go well and I'd once again like to congratulate Robert & Melonie, Jeff & Lorraine and Ashley & Becky on tying the knot in Ischia. It's been a real pleasure to play at least a small part in the big days of each couple and something we hope to do a lot more of in the coming weeks and months.

Apart from the weddings it's been a case, as ever, of looking for new things to offer visitors to the island. This week for example we've visited two new villas, found a schooner that we can offer trips around the island on and are now able to offer a new activity, kite-surfing. I'll be adding a page of information about the kite-surfing soon but for the uninitiated it's a cross between water-skiing and wind-surfing where you hold on to a parachute that pulls you across the water on a small surf-board. We've found some English-speaking instructors who are fully qualified to give lessons down at Maronti beach so this is something we're quite excited about. If anybody is interested and would like to know more about it just drop me a line and I'll get right back to you.

We've also added to the number of hire cars that we are able to offer with lots of extra models now available at very competitive prices. Anybody who's on the island at the moment will have noticed the profusion of Mini Moke jeeps as they drive around in the open air with the wind blowing through the passenger's hair. The jeeps are a lot of fun and in high demand but we do have some availability for the coming weeks so again, let me know if they appeal to you and I'll check on availability for your particular dates.

Looking ahead to next week, looming large on the horizon is the Festa di Sant'Anna which takes place next Saturday 26th July. This is one of the marquee events in the Ischia calendar and worth a trip across the water from the mainland by itself. The whole thing unfolds around Castello Aragonese in Ischia Ponte where huge crowds will gather to watch first, a series of floats on the water, a little bit like a carnival but on the sea, where each of Ischia's six main towns will provide an entrant into the competition to see whose is the best. There's a big PA system with DJ's, singers and musicians to keep the crowds entertained and the climax of the evening is the spectacular firework display and simulation of the castle on fire. Not to be missed!

Before finishing this week's blog I'd like to give a mention to a young man from the USA who I met earlier this year, Gregory Kamradt. Greg was spending some time exploring Italy and eventually found himself in Ischia. Inspired by what he saw while he was here, he decided to put together a website called "The Ischia Project", where he used his photographic and journalistic skills to put together a fabulous site that shows Ischia in a different way with more of a focus on its people or the people that have also found themselves here at this moment in time. The site is worth a look, even if I hesitate to say so after seeing my own horrendous photo on there!

Smoothly moving on the subject of this week's photo, I've chosen one from Castello Aragonese with one of its beautiful bougainvillea-clad courtyards that can be found at almost every corner of this fascinating medieval fortress. In fact the bougainvillea is really relevant as it can be found flourishing all over the island at this time of year. The bright reds and purples of the flower add a beautiful splash of colour contrast against the azure blue backdrops of the sea and the palette of greens found in the mountain areas.

Ok so that's all from me for this week. I look forward to hearing from anybody who has any questions about Ischia or needs advice about accommodation, travel or anything else you can think of so don't be backward in coming forward!

Born on this day: Macedonian King Alexander the Great (356 BC)