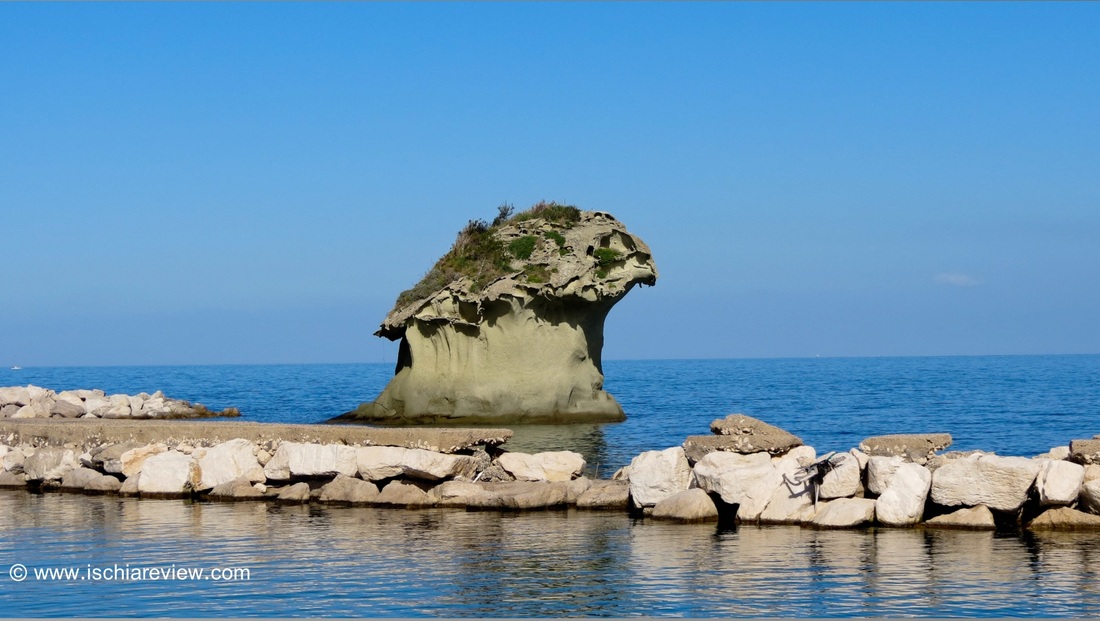 It's a slightly mixed start to the new week weather-wise. The dominating feature outside is the fairly strong wind but apart from that the outlook for the day is quite good. Despite being well in to the second half of November the temperature today will be significantly up on yesterday with a maximum of 23° celcius (73° fahrenheit) forecast for the afternoon, dropping to around 18°C (65°F) this evening. No doubt there'll be a few hardy souls out windsurfing but I probably won't be among them!

Today's photo is of one of Ischia's most iconic sights, Il Fungo (The Mushroom) rock in Lacco Ameno. Lying close to the beach and harbour in the main town, the rock measures 10 metres in height and the reason for its existence and slightly incongruous location is the cause of some debate. There are two main schools of thought, one that it's a fragment of Mount Epomeo that was blown seawards after a huge eruption of the volcano when the island was going through its formative stage, and another theory is that it formed from under the ground as part of the same geological process many millions of years ago.

It would seem there is no definitive view of the mushroom's origin but what is in no doubt is what it's made of. Ischia is famous for its volcanic beginnings and those eruptions that happened all those years ago created an island full of a special type of rock called "tufo" (tuff in English). The porous rock is formed of volcanic ash following an eruption and is a major feature of Ischia. In fact to give the rock its full name it should be described as "tufo verde" (green tuff), as it is slightly different from other types of similar rock found in this region such as the "yellow tuff" that can be seen in nearby Naples for example.

The green tuff stone is a contributory factor as to why the island is know in some parts as "l'isola verde" (The Green Island). Anyone approaching the island by boat will first be struck by the presence of the huge green mountain (Mount Epomeo) that dominates its centre, but that green colour is caused mainly by the trees that stand tall on the mountain slopes. When on the island however, the Green Island can be seen in a different way with may examples of the tuff stone in evidence and every day use.

The most popular usage of the rock is in the walls that separate properties, fields and farms across the mountainous and hilly areas. Many of these walls exist from ancient times and the method with which they were built is still used today. The most incredible thing about these walls is that they are built without using any mortar to join the rocks together. Instead, skilled masons shape the rocks and stack them together to create strong, sturdy walls that last for centuries or more in some cases. This is an art-form that's been passed down from generation to generation and the tradition still holds strong in Ischia.

It is not however, solely for purposes of tradition that the walls are built in this way as there are some important practical benefits to the process to consider as well. Firstly, by leaving gaps where the mortar would normally be dramatically improves the drainage of the fields and properties which allows the water to flow from the mountain tops down to the sea. These gaps and the porous nature of the rock means that it absorbs water that might otherwise collect in pools and puddles creating problems for the crops, among which in many cases would be the vines used for making the island's wine.

There are many other examples of the tuff stone across the island such as in the many "cantine" (cellars), which are often carved out of the side of the mountains to create a cool environment in which to store wine and other provisions. There are also some spectacular buildings created out of the rock such as the dark green Chiesa di San Ciro (Church of San Ciro) in Serrara Fontana or "l'arca" (The Ark) restaurant close by which closely resembles Noah's Ark and seems to defy the laws of gravity with its incredible shape.

For more information about the tuff stone and its usage you can drop us a line and we'll be happy to help.

Ok, so on the day that William Tell shot an apple off his son's head I wish you all a good start to the week and there'll be more about Ischia waiting for you here tomorrow morning.

Today in history: William Tell shoots an apple off his son's head (1307)