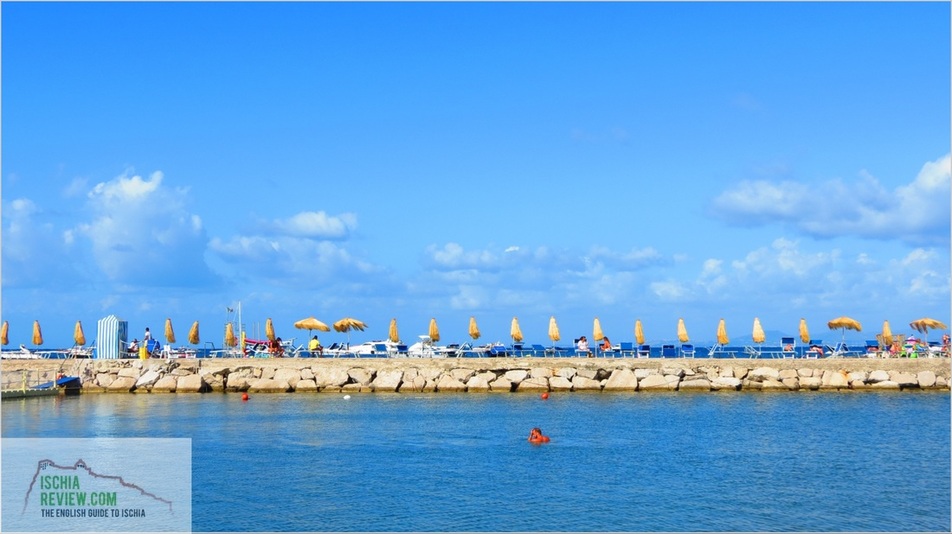 Welcome to our weekly Ischia blog, Ischia on Sunday. Here you can see the entry for Sunday 31st August 2014.
Good Evening Ischia!

It's Sunday evening and time once more for my weekly round-up of all things Ischian (or Ischitano as they say here).

Almost like clockwork, a brightly illuminated cruise ship enters stage left as I gaze out on to Punta Imperatore, just like it did at the same time last week, while up above, the bright half-moon resembles a ying-yang as it partially illuminates the narrowly winding streets that form a labyrinth below it.

So into September we go, leaving August behind as we enter an important new phase in the annual cycle of island life. Much as we all love the peak of the summer season, there's certainly a place for the calmer atmosphere that settles over Ischia as soon as September arrives, making life just a little bit easier in various ways. Hiring a car, a scooter or a boat isn't quite the mission that it is in August, whilst you'll also find there are a few more spaces available in the car parks, restaurants and best of all, the beaches.

As if to mark the change of month, the weather will strongly be making its presence felt tomorrow with a bit of a storm expected and a slightly unsettled few days to follow thereafter. According to the weathermen the temperatures should hold steady at a maximum of around 30° Celcius (85° Fahrehneit) with the evenings still nice and warm at around 21°C (70°F). We'll see what weather the week brings us anyway.

Looking back over the last week it's been another period with all sorts of weird and wonderful goings-on.  Last Tuesday (26th August), we had the fantastic spectacle of the Festa di Sant'Alessandro to enjoy. Although it wasn't a part of last year's events calendar, the annual parade was brought back this year, much to the delight of the thousands of visitors who lined the streets between Ischia Ponte and Ischia Porto to witness it. Starting from Castello Aragonese, a seemingly never ending flow of participants filed through the main thoroughfares of the island's capital, dressed in costumes depicting the history of Ischia from the times of the first Greek settlers followed by the Romans and on to the royal families of the middle ages, with dozens of horses also playing their part to add to the regal splendour of the occasion.

On Friday night we had yet another one of those sagras that I've been mentioning a lot over the last few weeks, this time the "Buonopane in Festa" event. Buonopane is one of the smallest villages in Ischia but it's famous for its special type of folk dancing called the "n'drezzata". Passed down through the generations, the n'drezzata is an exclusive club that only your father can enter you into if he's a member and the annual performance at the festival is carefully planned for months in advance. The highly skilled dance involves a group of men dressed in traditional costumes, armed with wooden batons that create a rhythmic sound as they clank against each other. The highly choreographed moves see the men at full concentration as they try to complete the complex manoeuvres without knocking each other out! In full dress as it was on Friday night, it's quite a spectacle, one which is depicted on a large mural in the tiny village's main square which is well worth a look if you're over that way.

Following hot on the heels of Buonopane in Festa we then had last night's (also performed this evening) wonderful "Pithecusa Galà", performed by the famous Aragona Arabians, an equestrian group based in Ischia who provide riding lessons, show-jumping and shows such as last night's. The square outside the Chiesa del Soccorso was transformed into  a specially created arena for the horses with temporary grandstands at the sides. Under the stewardship of Bartolo Messina, the Aragona Arabians family of horses and performers put on a spectacular event that showcased their incredible riding skills, including some intricate dressage moves that demonstrated their control over the horses. There were also some astonishing acrobatics and chariots drawn with four white horses but surely all left in the shade slightly by the appearance of Charlie, the world's smallest horse which just oozes cuteness. (see our facebook page for a full photo album of last night's show).

So after two whole nights out in a row, I'm sure you can appreciate that I must be exhausted by now but I can still just about muster enough energy to give a few noteworthy mentions. Firstly I'd like to say how honoured we were to be contacted by the author Toni de Palma this week. Toni had recently seen the blog and took the time to explain her own affection towards Ischia which stems from many visits to the island as well as some strong family links. With works such as "Under the Banyan Tree", Toni de Palma is well known for her gripping fiction and readers of this blog will be interested to learn that book number 2 in her "Devil Series", tells of a story based in good old Ischia. Titled "The Devils Temptation" the plot revolves around high-jinks aboard a luxury yacht moored on the island and sounds well worth a read.

Whilst merrily name-dropping I should also point out that we had yet another celebrity visit us this week in the shape of fashion guru Roberto Cavalli who was spotted relaxing in Sant'Angelo, hot on the heels of Spielberg, Streisand, Bridges and co last week.

I would also like to introduce you all to my new addiction, an addiction that is roughly 24 hours old. Last night we took a passeggiata after the Pithecusa Galà and stumbled upon a little kiosk called "La Granita". Located close to the fountain in the main shopping street of Forio, the little store specialises, as the name would suggest, in granita. To those that don't know, granita is a kind of crushed ice drink that you can find in lots of Italian bars with a variety of flavours. However, the granita served at La Granita is a little different as it uses 100% natural ingredients and I can safely say I've never felt so refreshed as I was after one of their cups of Peach and Pineapple. In fact now that I mention it I might try and sneak out and get another one now before they change their mind and shut up shop (can you feel the addict's suffering?).

Finally, I would also like to mention our boat rentals page, it's slightly under re-construction at the moment but the good thing is that you'll find there are now roughly double the amount of boats as we had before, giving you all a much larger variety of craft to choose from so if you are on the island and fancy getting out on the water, go and check the page out.

Ok, that's more than enough from me for this week and congratulations if you've made it this far down the page. ;-)

Back with more (or maybe even slightly less) next Sunday.

Today in history: Henry VI is crowned King of England at the age of 9 months, arguably a bit too young. (1422)