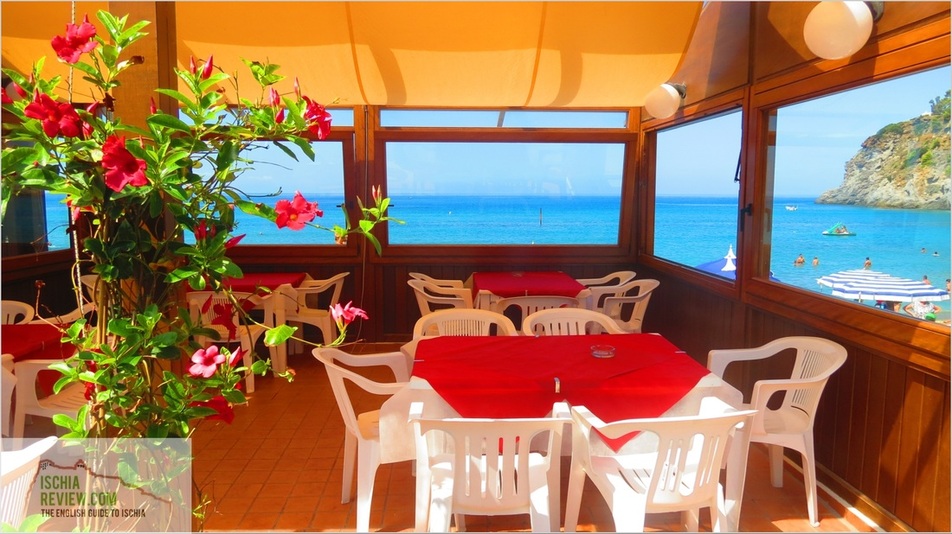 Welcome to our weekly Ischia blog, Ischia on Sunday. Here you can see the entry for Sunday 7th September 2014
Good Evening Ischia!

Greetings to you all from a sultry September evening on the island of Ischia.

As I start to write, the sun is setting in a flurry of spectacular colours to my right with purples, oranges and reds forming an "Aurora Ischitanis" over the Tyrrhennian Sea, while to my left, Mount Epomeo is innocently being watched over its shoulder by the curious moon which appears to be about 3 miles from here, The Sea of Tranquility a mere dive away.

Ok so maybe I could brush up on my perception of distance or just plain stop exaggerating but where would the fun be in that? Back to relatively more factual reality, the weather has been a real hotchpotch (I seem to have caught the spell-checker out with this word which makes me quite happy!) with a bit of everything making a cameo appearance. Today for example has been very hot at times and very cloudy at others, while for the rest of the week we've seen some lovely days full of sunshine mixed in with some quite strange ones where it's been a bit stormy and windy. The forecast for the week to come is fairly settled with a high temperature of 29° Celcius (83° Fahrenheit) and an evening low of 23°C (74°F), bringing both daytime sunbathing and evening t-shirt strolling into play.

One of my personal highlights of last week came in fact when we had the worst weather. Well, it's what I would call the worst weather but to Ischia Review's friend Giaocchino, the high winds of Monday were manna from heaven. You see Giaocchino is a kite-surfer who spends much of his time in the forlorn search of the right conditions in which he can practice his obsession. I just happened to be passing Chiaia Beach at the time and saw somebody in a wet-suit, fighting with a rather large kite as he attempted to enter the treacherous looking water. Having heard so much about the sport from Giaocchino himself but never having witnessed it at first hand, I decided to take a front row seat on the beach to watch the action. Some action is was at that, rarely have I ever seen somebody so liberated and full of joy, like a bird who has just worked out what those wing things are for the very first time, or an artist who has found how to create the very image that was in his head. With all kinds of incredible manoeuvres, at times surfing, at times flying, this was a man locked in to his own world, completely at one and relaxed in the hazardous environment which he tamed with a rare amount of flare. An incredible spectacle.

In the pursuit of bringing the very best of what Ischia can offer, I yesterday decided to go in search of a more satisfying route across Mount Epomeo, one that went in more of a pleasing circle instead of descending in the identical direction of the ascent. Having done a little bit of research I worked out that it should be possible to start the walk in Fontana village and end in Sant'Angelo without ever walking along the main road. I would say this resulted in around a 43% success, as I neither finished in Sant'Angelo or avoided the main road, but I did at least know where I had gone wrong by the end of it. At times I was walking through clouds at the top of the mountain, completely alone and with nothing but a deathly silence to keep me company. Much as it was all a but weird, I did take note of the breathtaking views that can be had from the Frassitelli area of the mountain, and will be taking a slightly adjusted route later this week as I think this will be something many people would enjoy. Said route will subsequently be added to the website with full instructions and helpful photos so keep an eye out for that on our "Trekking in Ischia" page if you're planning a visit to the island and would like to do some walking.

Looking ahead to next week, one of the most unusual events of the year is the Festa di Santa Maria Al Monte which takes place every 12th September. Essentially, the day is marked in honour of Santa Maria (Saint Mary) and results in a series of events around the tiny church high up on the mountain slopes, Chiesa di Santa Maria al Monte. What takes place is a kind of pilgrimage up to the church, and once up there people enjoy picnics and play traditional outdoor games. There is also the frankly ridiculous running race that starts in the centre of Forio and ends at the church. I say ridiculous because by the time you've walked up to the church you will be exhausted so I can only imagine how the runners must feel, although I do appreciate we're talking about a stratospheric difference in fitness levels here!

In terms of upcoming events, keep an eye on our facebook page where we try to keep as up to date as possible, but if you prefer the personal touch feel free to drop us a line, let us know when you're going to be here and we can tell you what's going to be on while you're here.

I'll finish with a brief mention of this week's photo. This was taken a couple of days ago down by San Francesco Beach, the vivid contrast of bright colours at Ristorante Da Giovanni catching my eye on one of those nice, sunny days that I mentioned.

Ok so I'll be back with more next week and remember to drop us a line of you need anything while you're here.